Our last stay in the Canadian Maritimes was St. Andrews...August 6-13. St. Andrews is a National Historic District. The small town is one of the oldest in the Maritimes. Located in the Bay of Fundy, it is a treasure of beautiful architure, scenery, and rich in marine life. Today, it offers all the features of a modern resort, yet the streets and people have managed to retain a turn of the century charm.

We went on the Zodiac Whale Watching Tour. It was a 2:00pm tour.  It was a foggy afternoon in the bay, but it cleared and what a treat. We saw quite a few  finback whales.The finbacks are the second largest mammal in the world. Our captain said the whales we saw were about 60 feet long and 600 tones! The whales use the bay as a feeding ground during the summer months. The whales feed on enormous amounts of krill,squid, and schools of herring, pollock, and mackerel as a result of the Fundy tides. The Bay of Fundy is also a preferred location for whales to give birth, both for the abundant food and the protection the Bay provides. Up to 12 species of whales can be found in the Bay of Fundy during the summer months. The seals were cute too and we learned that they do not have any natural preditors in the Bay. 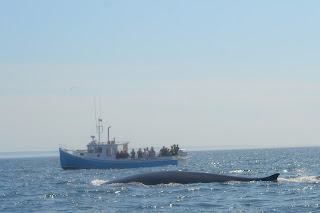 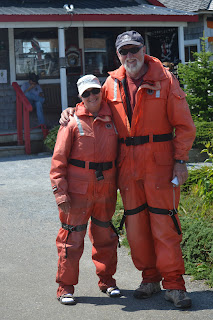 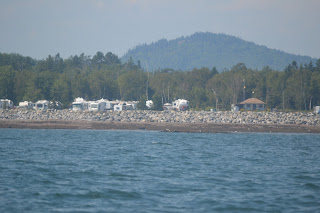 This was our campground...Kiwanis Oceanfront Campground. We were heading back to the dock when I noticed we were passing by it. 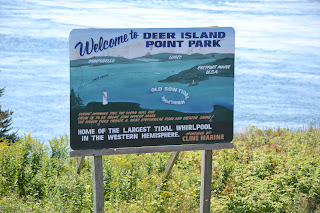 Joe and I decided to take the Harley to Deer Island. We were told about the Old Sow Whirlpool...the largest whirlpool in the Western Hemisphere. You have to take the St. George Ferry...about a 30 minute ferry ride...to get to Deer Island. We were told to be at the southern point of the island 3 hours before the high tide...that was 2:37pm. We got there, had a picnic, met several other people also waiting, watched the seals play and the boats go by, and waited...finally, a young girl who had been coming to Deer Island for 20 years said she had never seen the whirlpool...something about the moon having to be in just the right phase....we didn't see the whirlpol, but it was still a beautiful place to be and a scenic ride as well. 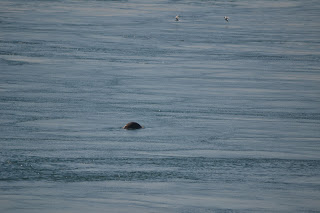 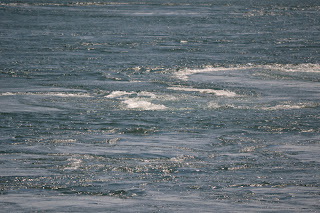 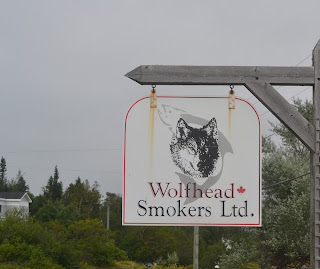 Our next door neighbors for several nights were Geoff, Tina,  and their children Josie and Maxx. Geoff  told us about Wolfhead Smokers and even brought over samples of their hot and cold smoked salmon on crackers for us to try. WOW...it was unbelievable. We met the owner Karen Wolf at the Thursday market on the docks in St. Andrews the next day. When we visited her business on Saturday, Karen helped us with our selection of smoked salmon, gave us recipes, and packed our salmon for traveling home as we had other stops to make. Their website...www.wolfheadsmokers.com... has a short, but informative video of the process. I cant leave this topic without saying we have already had 2 delicious meals from 1 of the hot smoked salmon filets we bought.

Joe and I both enjoyed our stay in the Maritimes....just over 5 weeks.  It would have been 6 weeks, but we could not get reservations in Halifax. We met Charlie and Marie in Cavendish. They are from Halifax. They took us to dinner at a lovely restaurant (The Dunes) on the island their last night at the KOA. Since we missed Halifax (and now have friends there), Peggy's Cove, and the eastern shore of Nova Scotia and since I do want to ride the ferry to New Foundland too......sounds like a trip in the making!!!

Joe and I arrived at the N. Sydney/Cabot Trail KOA on Cape Breton Island on July 27th. 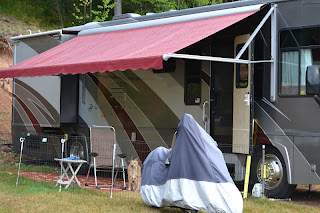 This was our home for nine nights.  What a treat.  We backed up to the side of a mountain and enjoyed the view. 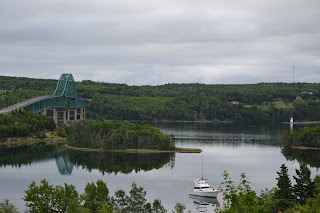 This was the best view we have ever had from our front window.  The bridge, Seal Bridge, crosses the Bra d'Or Channel. 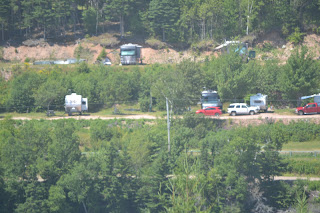 This is a view of our home as we crossed the Seal Bridge after shopping in Sydney.  On Sunday the weather was perfect for our Harley ride of the Cabot Trail loop.  We decided to ride it counterclockwise so as to have the closest view of the coast lines.  The loop is 192 Km (119 miles) which was within our 6.5 hour window of time we allow ourselves to leave the puppies. 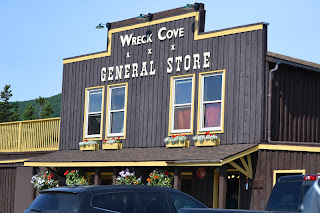 When you head out for the Cabot Trail loop be sure you have a full tank of gas because gas stations are few and far between and only offer regular.  We just made it to Wreck Cove , about a 30 minute drive from the Englishtown ferry landing on the east side of the island. Joe said the Harley didn't like the regular gas because it caused spark knocking but it didn't bother me. 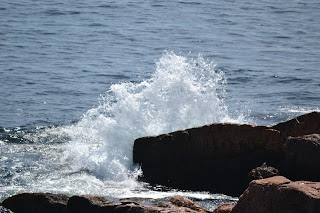 We stopped for a picnic lunch at the lookout over Neils Harbor.  I took several pictures to capture the waves crashing over the rocks WAY below. 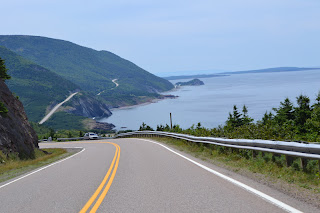 We could see for miles and miles. Words just cant describe the beauty! 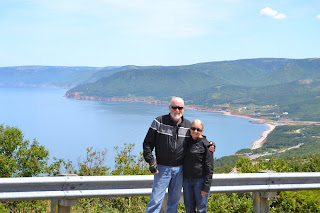 It was a great ride....and a great day!
Fortress of Louisbourg...is a national historic site and the location of a partial reconstruction of an 18th century French fortress at Louisbourg. We did a self-guided tour on July 30. 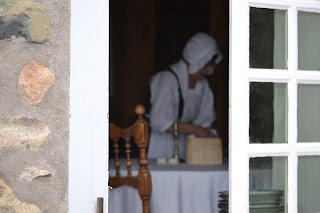 We had lunch at an 18th century home. It was a typical meal that would have been served during that era. Not only was the delicious meal of that time, but the dishes, flatware, and other utensils were of that time as well. We shared a table...family style...with 2 other couples. 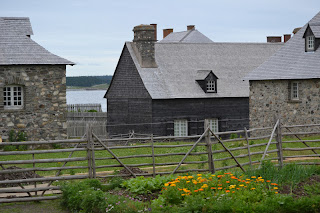 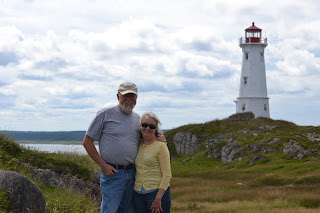 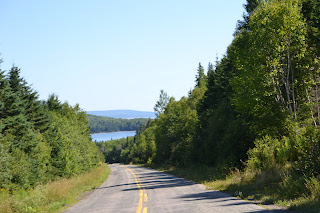 Bra d'Or Lake Loop...We took one last ride around the Bra d'Or lake on July 31. We wanted to see eagles...no luck though. We were out during midday...guess the eagles weren't!

The weather was so nice...we had another nice picnic...apples, crackers and cheese, and yogart with granola. We didn't want to leave! 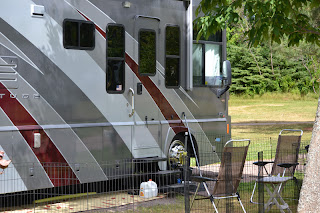 This was our home for 12 wonderful nights at the Cavendish KOA. None of us were quite ready to leave at the end of our stay. We had site 66...nice and roomy, shady, and not to far from the doggie park.﻿

We met Candice and Roger (from Ontario) the first night we were there. Actually, they came to meet our pups. All 6 of us visited (well, maybe not Jack) and played. Candice and Roger were over bright and early Monday morning and invited Dover and Wrecks for a walk to Tim Hortons. Wrecks and Roger are best friends for life!  Anyway, they stayed an extra day and we all rode to Souris...a small town on the eastern side of the island. We had a great lunch at the Breakwater Restaurant on the bay. That night, Roger and Candice shared the last of their butter tarts and pastries they bought from The Clucking Hen on the Cabot Trail with us. We had alot of fun and laughs and enjoyed spending time with them.

Some sites we saw on our Harley... 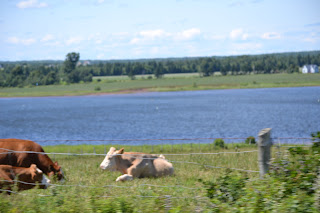 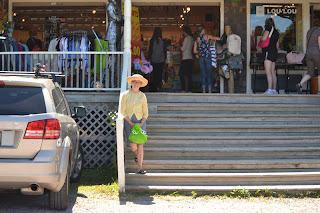