The Texas Gulf has been on our radar for several years.  We have made plans in the past and for one reason or another, plans changed.  Since we made the trip back to Georgia in January, this was the year !  It's all about the birds...birds we have never seen before...that drew us here.  Galveston was unharmed by Harvey, but it's a different story here in Rockport (less than 180 miles away) where the eye of the storm hit land.  Folks are working hard and will be for months to come, but everywhere we go, people are smiling, are friendly and have stories to tell centered around hope and the future.

Majestic Oak RV was our home for the 8 nights we spent here.  It's all new concrete roads are wide and pads are strategically placed for spacing. 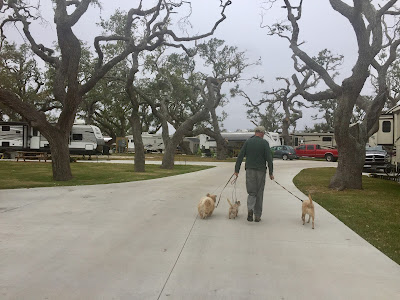 We went birding 4 of the 7 days during our visit.  A couple of the days were cold, drizzly, and windy (We don't do cold !).  I have read all of Ingrid's blogs about Rockport so I knew that a pasture near Big Tree was a good place to see Whooping Cranes.  The first time we were there, we did see the stately  Big Tree, but no Whooping Cranes. 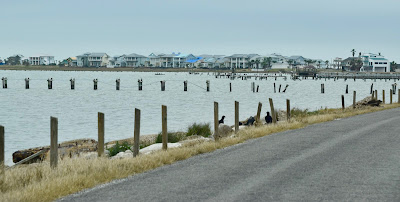 We rode along the St. Charles Bay. 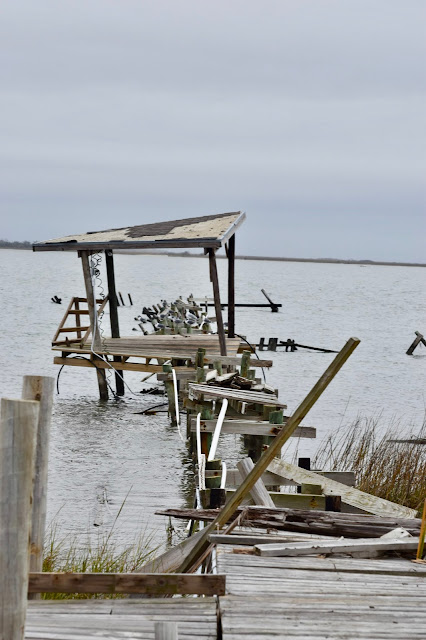 There are no more docks and piers, but we did see a few birds.  I read that Crested Caracara (in the falcon family) often feed on carrion and will chase vultures away from road kills.  Road kill was present and so were the vultures (quite a few of them).  This Caracara sat for awhile deciding what to do... 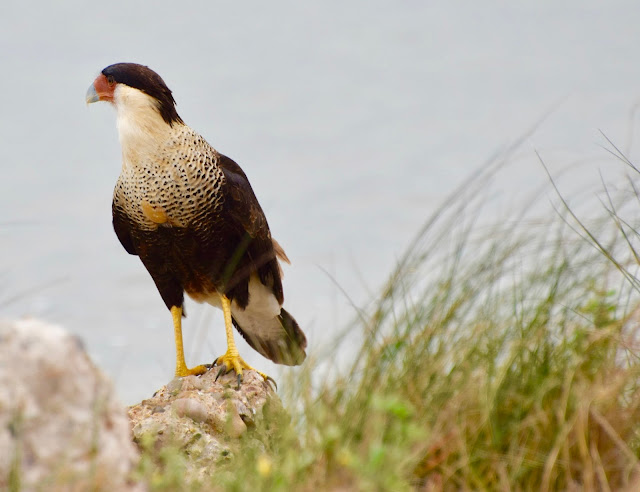 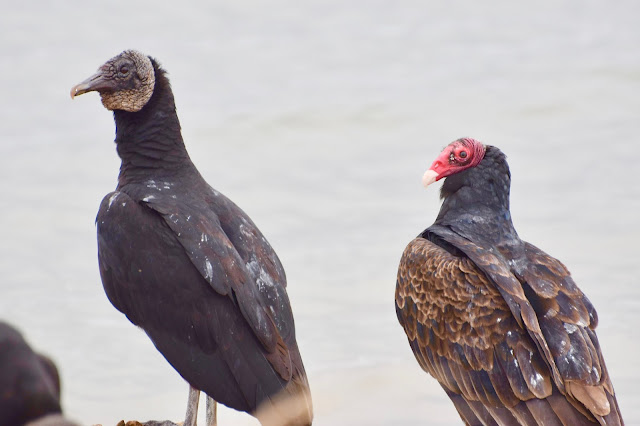 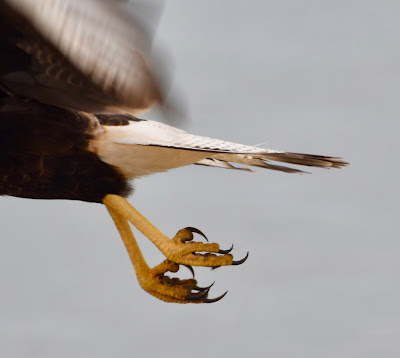 ...eventually he flew away. Just look at those talons !

Also, hanging out along the shore were...Great Blue Herons, Tricolored Herons, Roseate Spoonbills, a lonely Killdeer and a Greater Yellowlegs. 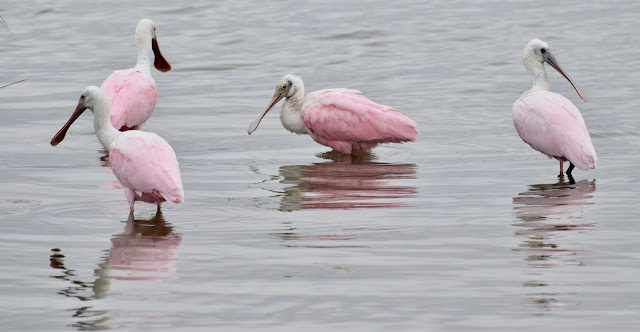 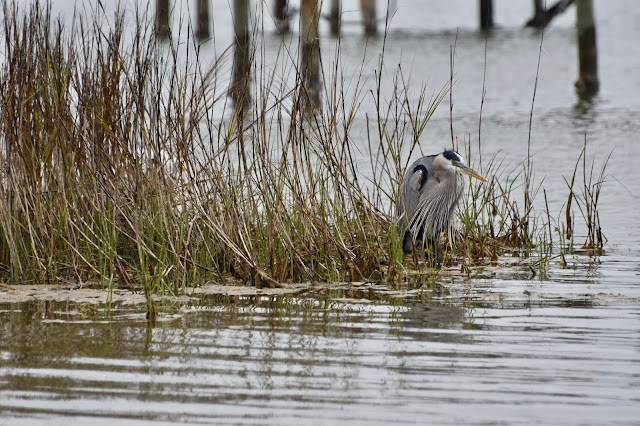 We visited the pasture several more times and did see the Whooping Cranes at a distance.  It was a struggle to get pictures of them.

One day we rode about 18 miles (which includes a free ferry) to Port Aransas.  Port A (as the locals say), is the only established town on Mustang Island.  Our first stop was Leonabelle Turnbull Birding Center. 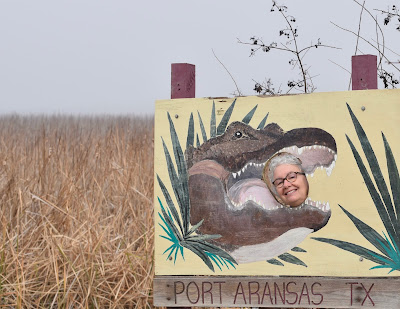 We were reminded that alligators live here too...beware!


After a very short walk, the boardwalk came to an abrupt stop.

We stood for awhile enjoying the Ibis.  It was fun watching this White Ibis try to eat his breakfast of yummy crab...taking one bite at a time...

until the immature White Ibis was sure he was invited.


We did spot a big gator a ways away.

The next stop was Joan & Scott Holt Paradise Pond.  This birding spot also had damage prohibiting our view of much of the 2 acre habitat and pond. 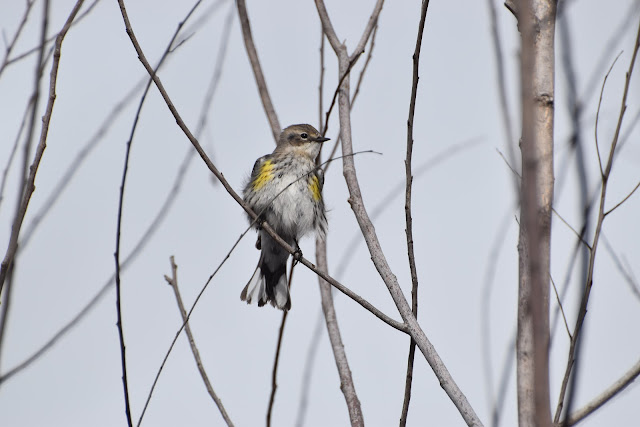 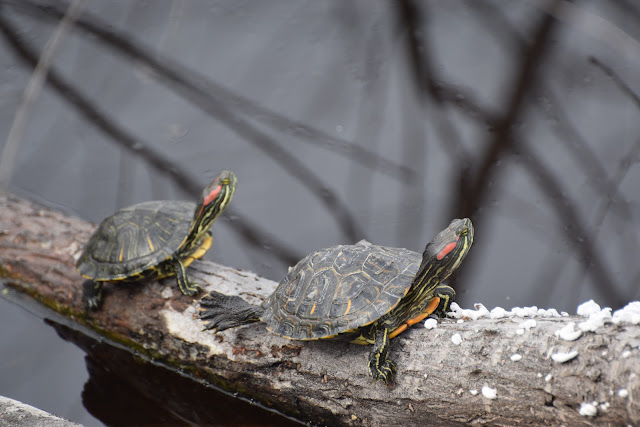 We enjoyed a nice walk and picnic at Roberts Point Park before heading home.  It's a nice park with a marina and fishing and a huge grassy area for picnics and playground. 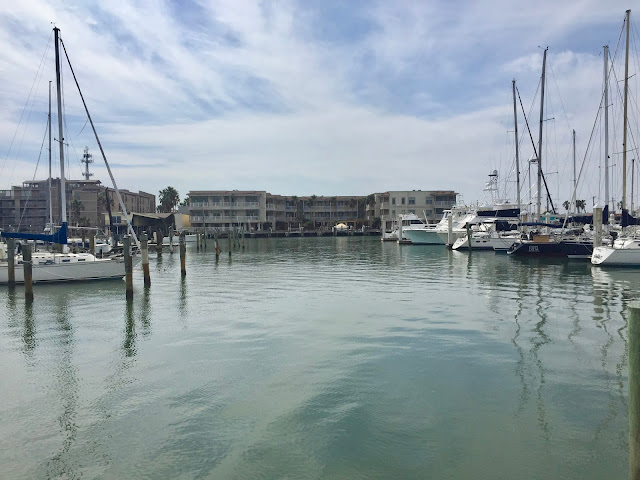 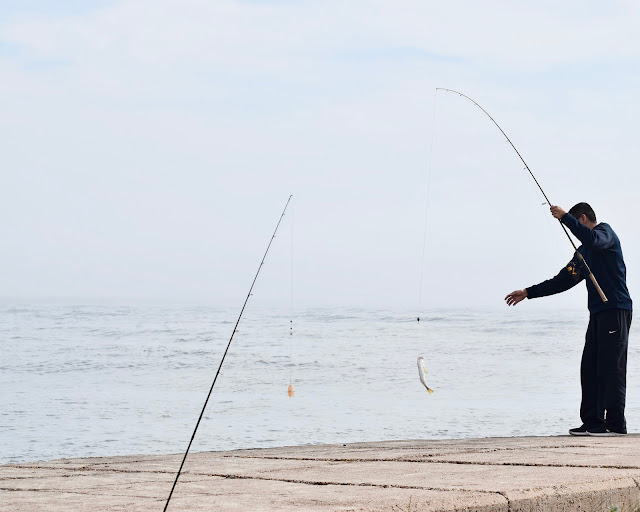 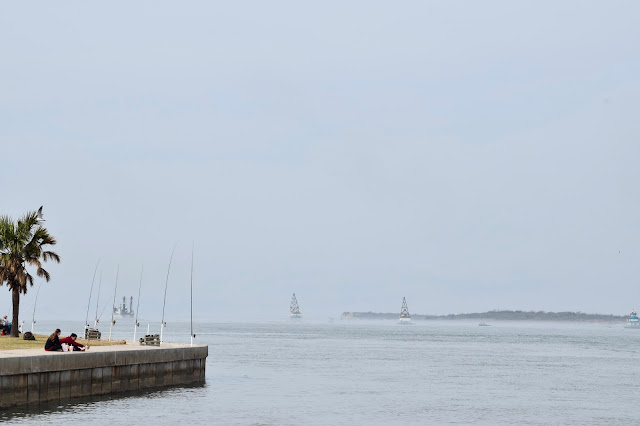 One day after our visit at "the pasture", we stopped at the pier on the south side of the Copano Bay Bridge.  The pier is closed, but there is a path to access the shore.  I had spotted a group of White Pelicans from the bridge as we drove by...you know what that means ! 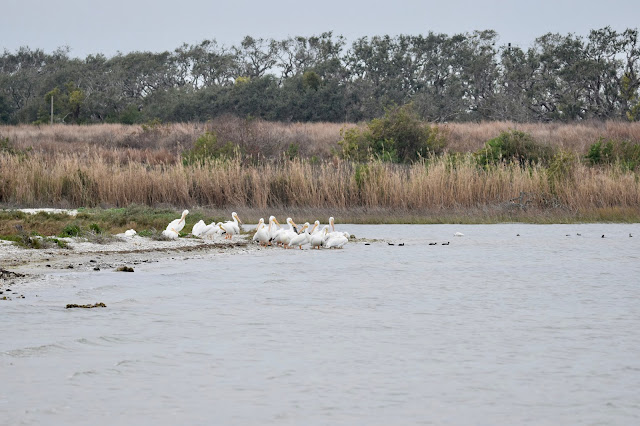 As with most crowds, there is always one in the group that stands out.  Pelicans are no different...it was this fellow that caught my eye. 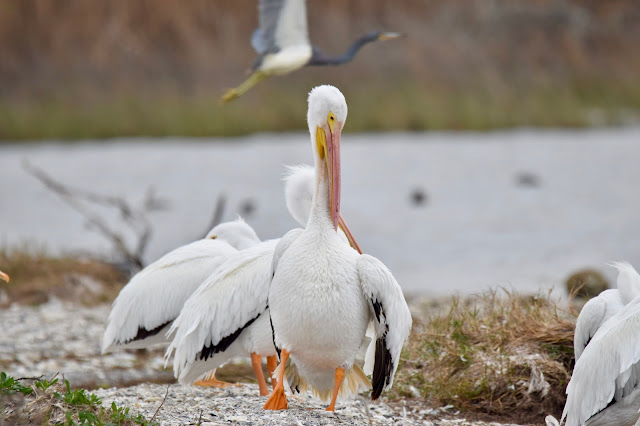 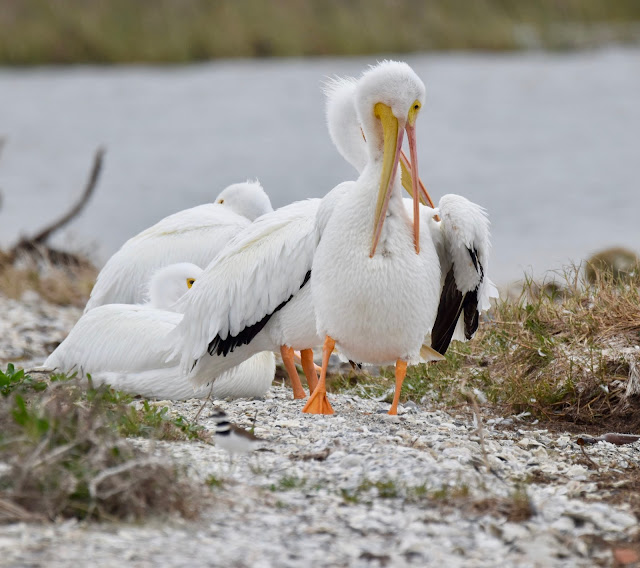 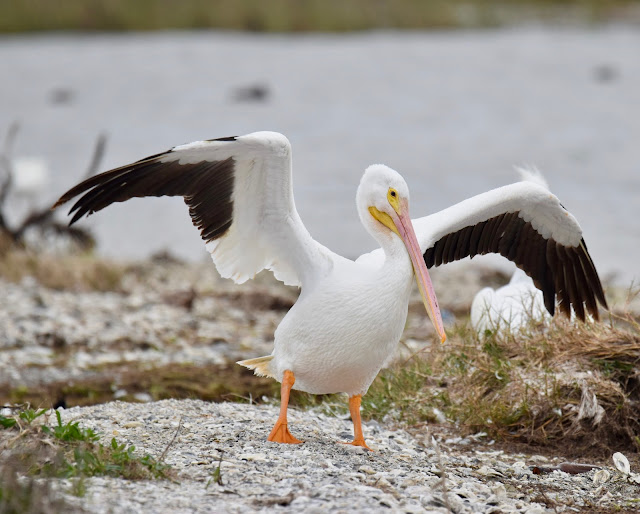 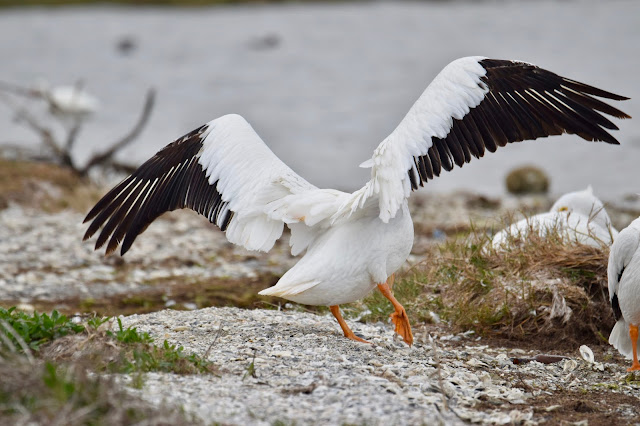 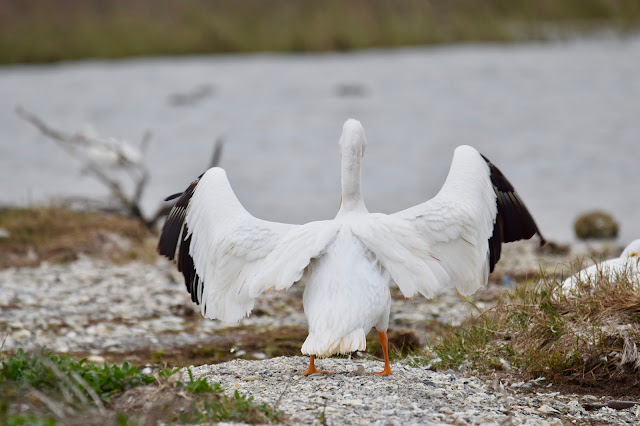 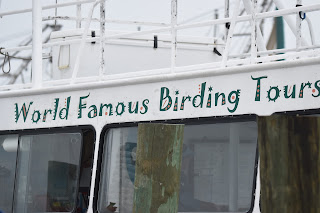 Our last excursion was aboard the Skimmer with Captain Tommy.  His 3 hour birding journey makes it's way to Aransas NWR.

Aransas provides a protected habitat for endangered Whooping Cranes as well as many other birds and wildlife. 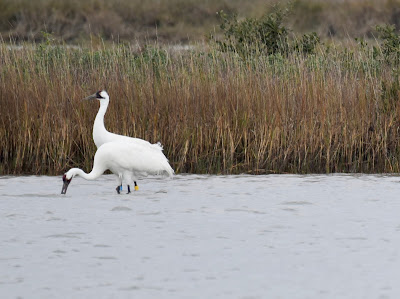 It was awesome to see several pairs (they mate for life and raise their chicks together) of one of the rarest and largest birds of North America.

These birds (about 600 of them) that winter on the Texas Gulf will make a 2400 mile trek north to nest in Wood Buffalo National Park in central Canada.

Whooping Cranes love blue crabs.  That's a good thing because blue crabs are needed to build up their body resources and reserves for their long journey home and for successful nesting.  Not only are the blue crabs high in protein, but the meat and shells are highly rich in calcium, necessary for strong bones and for forming eggshells. 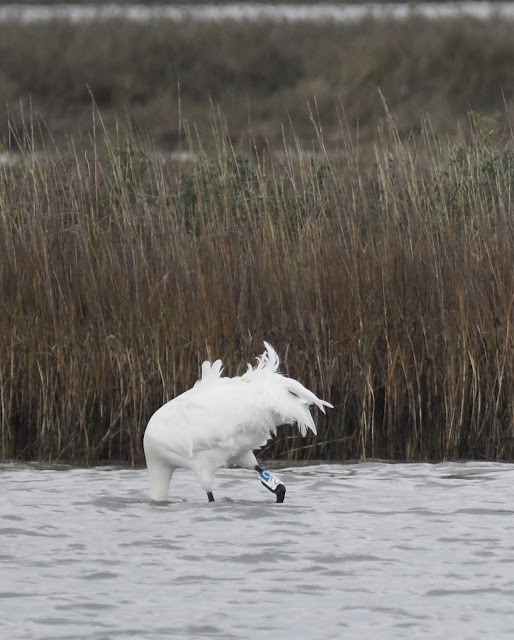 An adult crane can eat up to 80 crabs a day.

Not a real clear photo, but we did see an immature Whooper.  According to Capt. Tommy, they are only 4 to 5 months old when they make their first trip south.

We also saw other birds.  American Avocets have the prettiest blue/gray legs and feet.


American Oystercatcher (the bird with the red beak) was yet another first sighting. 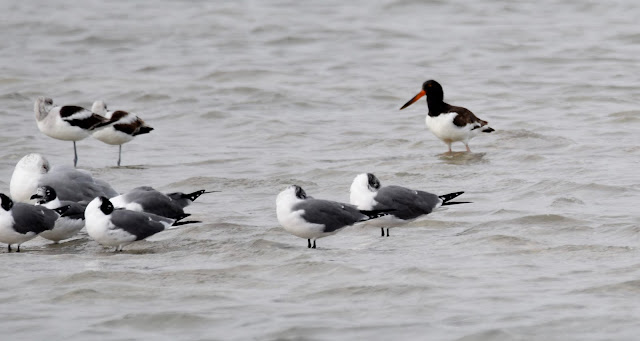 Guess what oystercatchers like to eat...duh!  Below they are gathered on a live oyster bed enjoying a mid-morning snack !

That wraps up our time on the Texas Gulf.  It has been a fun adventure full of lots and lots of wonderful birds.  I'm so happy we finally made it here.

Today was another chilly day with a high of 46 degrees.  It was nice and warm inside our cozy little home.  A great day for puppy snuggles and naps.  Tomorrow will be cleaning and packing day along with some cooking.  Saturday we begin the three day drive to Tucson for doctor visits, MH stuff, and hopefully some fun.    We are looking forward to some warm temps and I can't wait to see the Saguaros.

So until then, take care and... 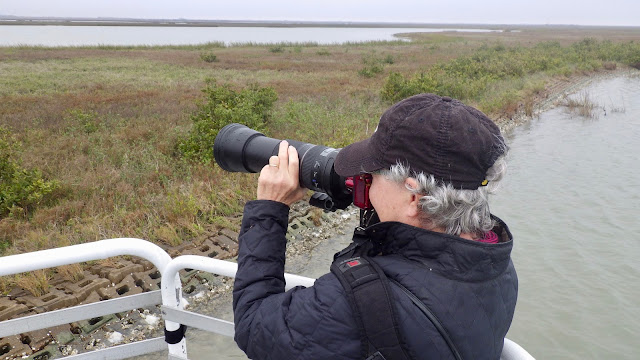 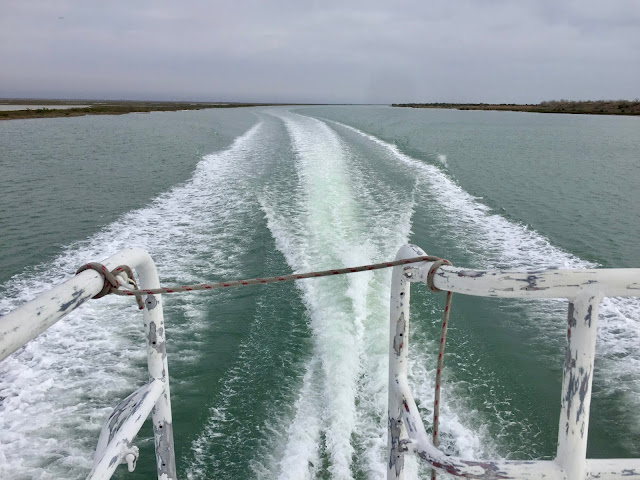