Coming home is the nicest feeling.  It's a new feeling for us...and one we totally enjoy !  Belle's kitchen is fully equipped so we don't have to transport dishes, utensils, cookware, etc back and forth.  We also have sheets, blankets and towels in the bus, but  we still find ourselves transporting a lot of tubs with clothes, groceries, doggie food, bathroom stuff etc. After a couple of days of unpacking and catching up the laundry, we were all settled in.  We haven't lived in our home during January or February and it's interesting being a homeowner here in the winter season.  The mountain of tumbleweeds that had settled into our backyard during our absence was removed...only to return again a few days later.  It's been very windy !

The second night after we returned, I was out with the puppies as it was getting dark.  I heard a "hoot", looked up in the pine tree next to our yard, and there it was.  Actually, there they were.  I shuffled the pups inside and just as I came back out with the camera, I saw wings spread out and thought dang it...I missed it again as the owl flew away.  There was a pair ! I was so surprised to see a Great Horned Owl still sitting at the top of the tree. 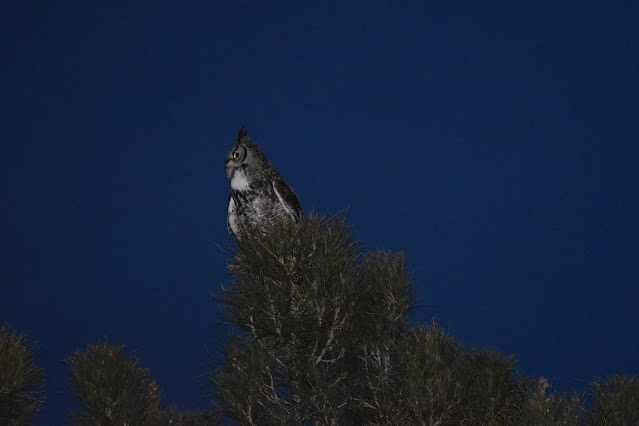 The owl that flew came right over the patio and after some googling, I knew it was the female as they are the bigger of the two with a wing span of up to 4.6 feet.  She settled somewhere close as the pair carried on the most marvelous conversation.  Did you know the female's hoot has a much higher pitch than the male's?  He sat in the top of the tree for awhile turning his head this way and that way and sometimes I thought he was looking right at me.  This was my first sighting of an owl in the wild. 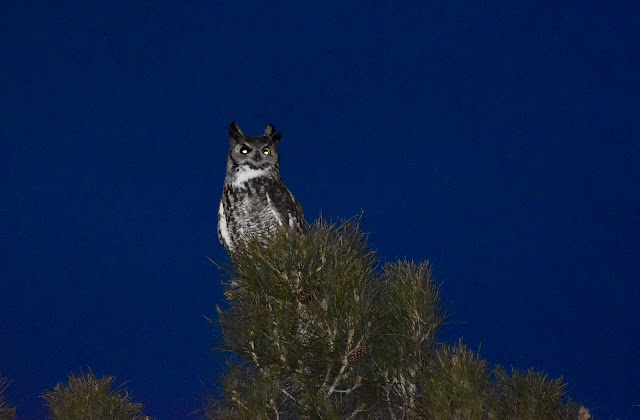 Our friends Carol and Ronnie left San Diego a few days after us.  They always make a stop in Phoenix to have their yearly MH maintenance.  There have been a few hiccups this year and as of today, they are waiting on a part...a diesel lift pump.  After staying close to the shop in Phoenix (one night at a Comfort Suite where their bikes which were double locked on the Jeep bike rack were stolen and a second night in a parking lot) for a couple of nights, they came to Tucson to stay with us. Our first guests.  Not only do we get to spend time with Carol and Ronnie, we get to snuggle with Cooper. 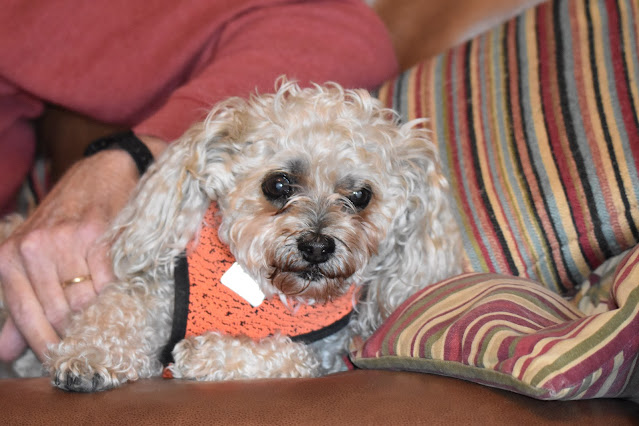 Carol always has beautiful flowers at home and when she travels.  These are a few pots she brought with her. I'm definitely planting tulips next year ! 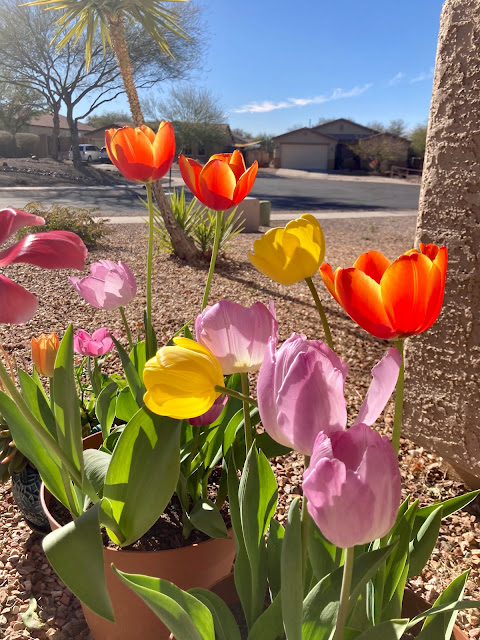 Our sweet Sally had a spa day...she always takes on a new personality after spa day.  Sassy and playful come to the top of the list for describing her.  She had a vet appt. this morning and blood work done to check her liver enzymes.  They have been very elevated for some time and she takes medicine I give her an hour before her breakfast.  A March 11th appt was made for dental cleaning and if the enzymes are still high when we get the results in a few days, she will have an ultra sound done on her liver and spleen at that time as well.  Dover is 15, Sally is 14 to 15, and Jack is 13.  We are so very thankful for everyday we have with them. 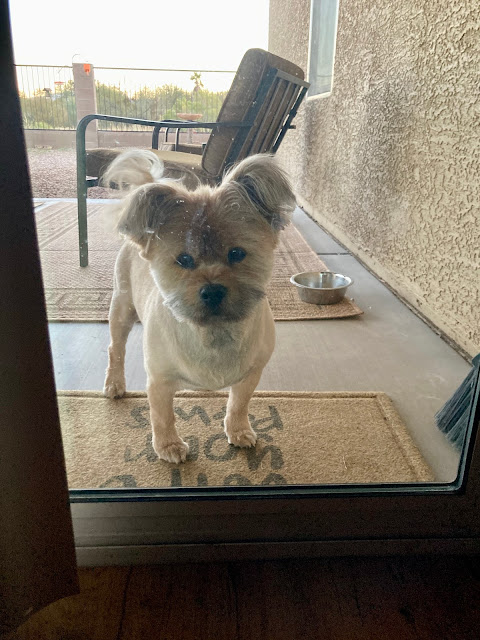 We weren't sure if our feathered friends would still be around when we returned.  The Cactus Wrens, my favorite, were the first to welcome us home. 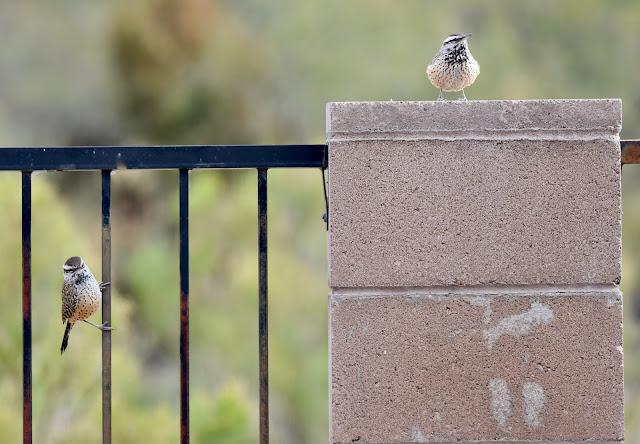 I was happy to see the suet feeder was not empty... 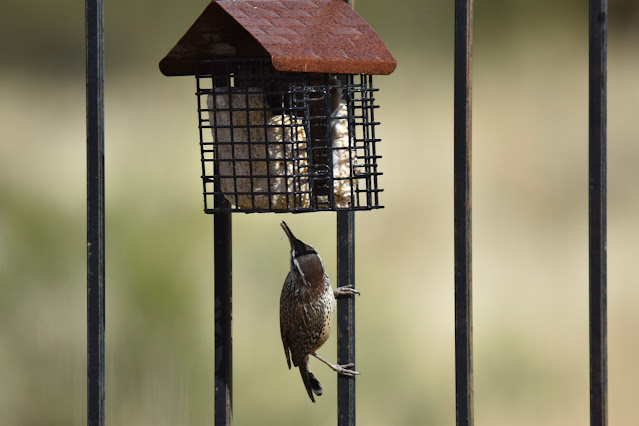 ...and Joe went right out to fill up the bird bath. 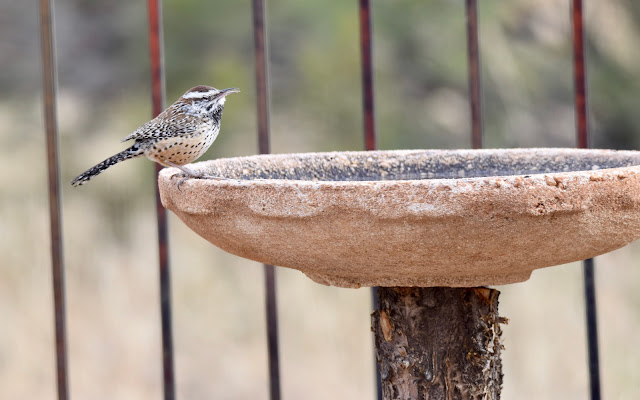 Sunday, the four us visited Tucson Botanical Gardens.  Ronnie and Carol had never been.  The "Seeing the Invisible" Art Exhibit is still there until August. 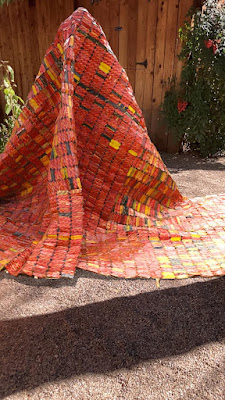 It is really pretty cool !  The only photo I got from that exhibit was a piece by El Anatsui who is a sculptor from Ghana and lives in Nigeria.

He is noted for transforming simple, everyday materials into striking large-scale installations.  Most recently he has used metal caps from discarded liquor bottles.

The other exhibit at the gardens now is "Glass In Flight" by Alex Herveri.  He says, "They are Earth's pollinators, garbage collectors, undertakers, and for millions of animals, they are breakfast, lunch and dinner." 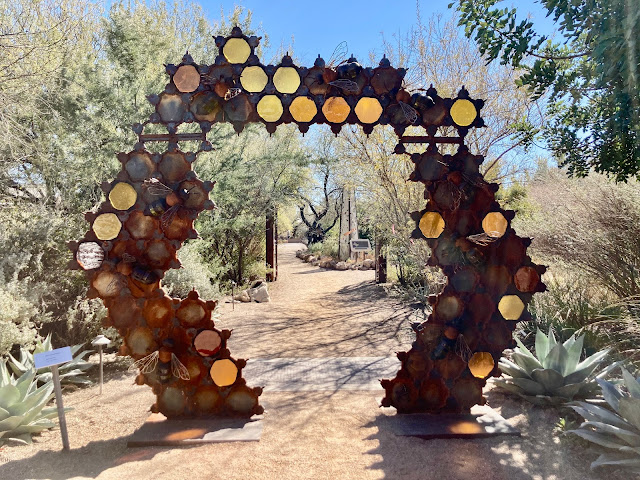 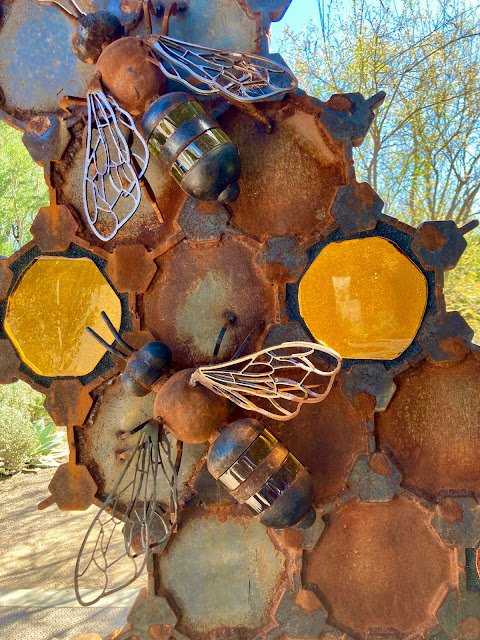 We meandered along the paths with butterflies, dragonflies and birds overhead and shared it with a variety of stalking beetles. 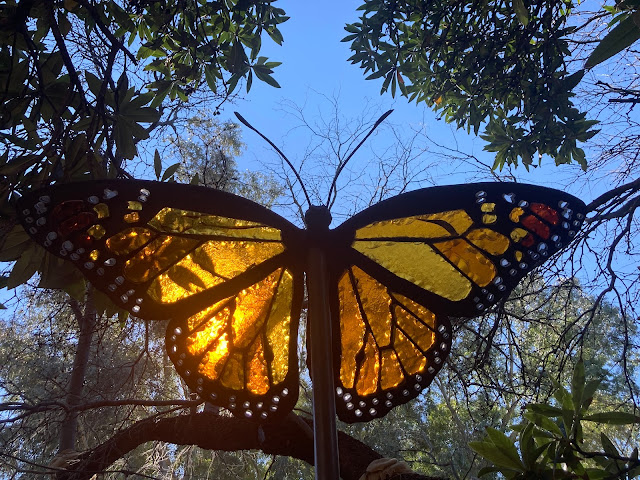 Also, "Glory in the Garden", a collection of original watercolors by Donna Helms was on display and for sale. 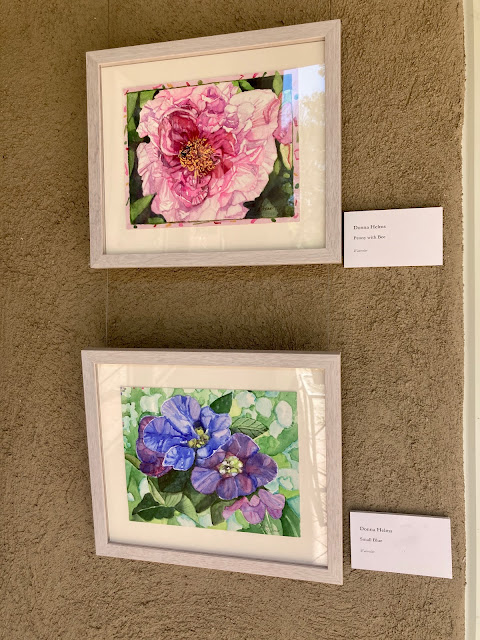 My favorite stop at the gardens is the Cox Butterfly and Orchid Pavilion.  The spotlight at the pavilion was the Atlas Moth...described as "one of the goliaths of the insect world".  Their wingspan reaches 9.4 inches.  It is fascinating to me that an Atlas Moth does not eat once they have emerged from the cocoon.  They don't fly very much either.  They conserve energy for mating.  These giants are endemic to the forests of Asia. 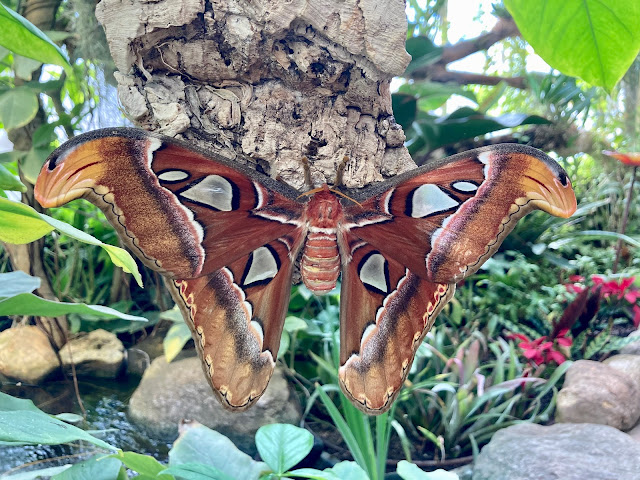 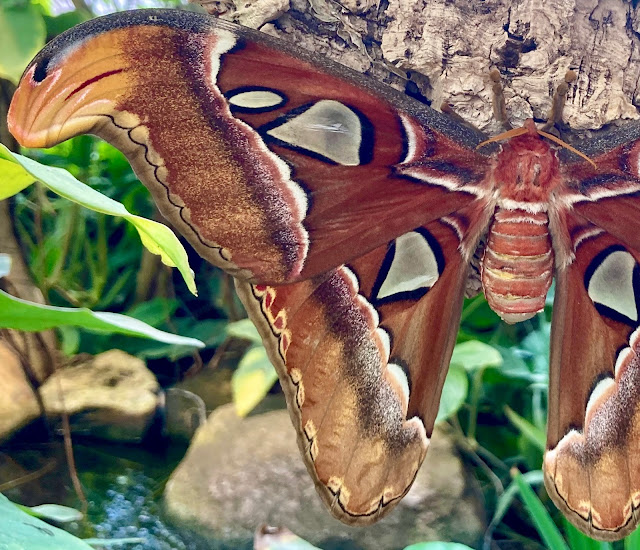 For me though, the orchids stole the show. 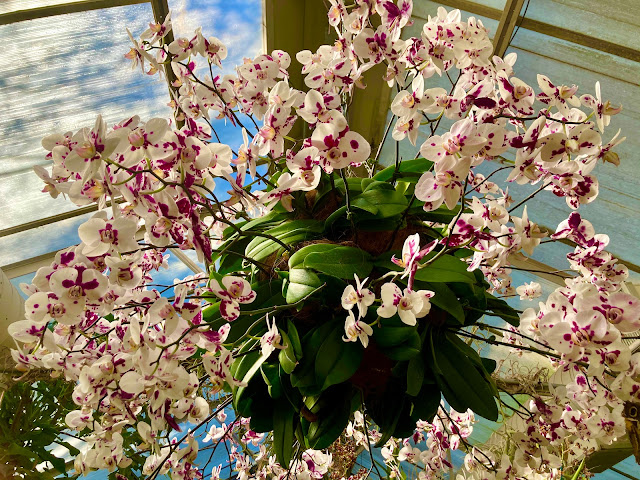 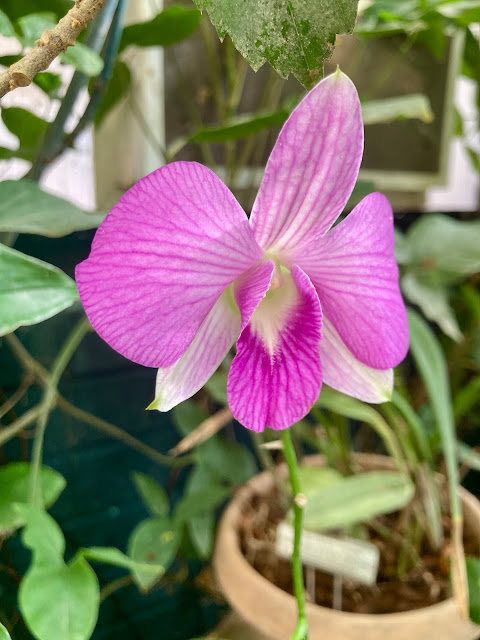 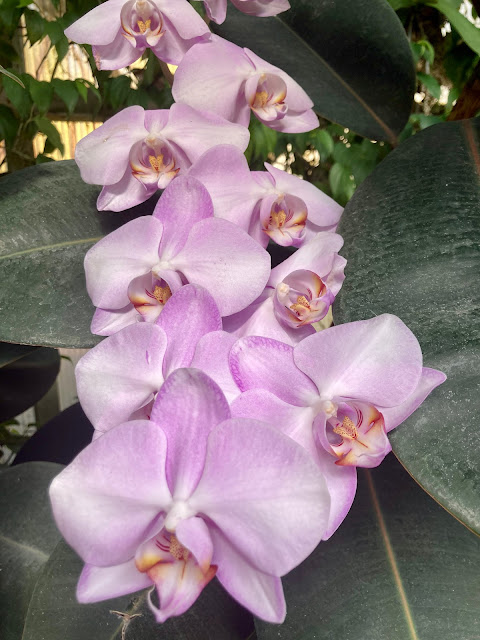 There is always something I have missed from previous trips to the gardens like this cozy little patio. 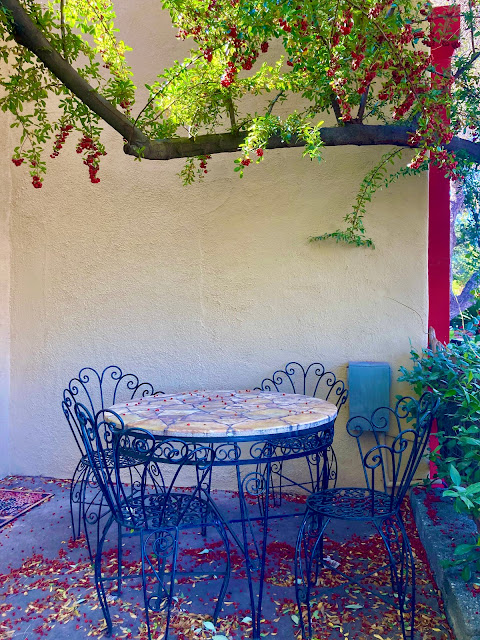 And with the different seasons, comes different things growing. The kitchen patio was full of yummy things. 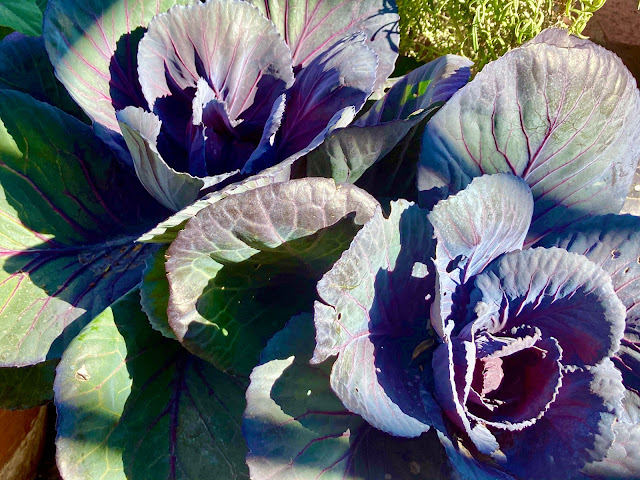 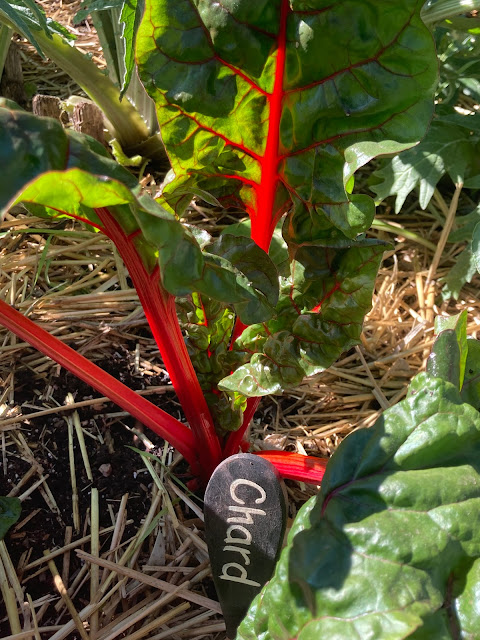 And yes, we all need to cover up and stay warm...even in Southern Arizona. 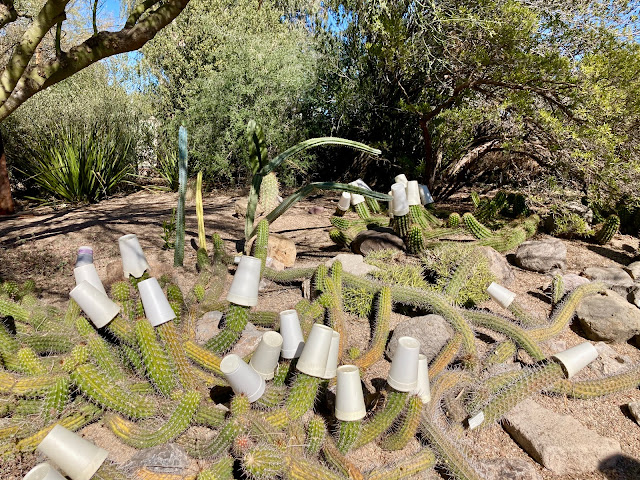 Yesterday, we had Sonoran Dogs for lunch and went shopping with Ronnie and Carol to find new bikes at the Trek Store. 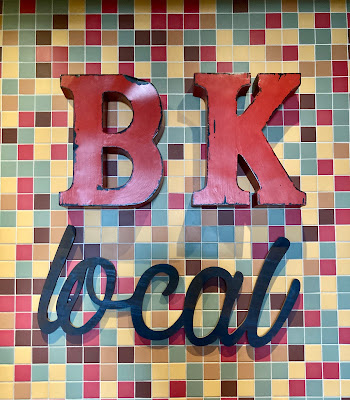 Ronnie said the dogs were yummy (Carol doesn't eat hot dogs...she's the smart one in the group!). 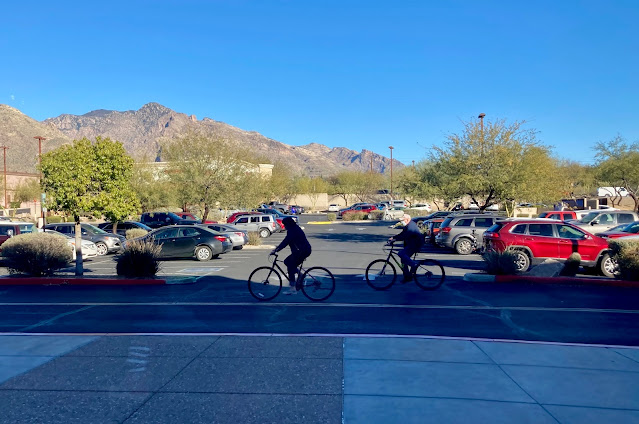 And two new beautiful Trek bikes were loaded on their Jeep's bike rack.

Ronnie is grilling salmon for dinner tonight.  It's way fun having company !

That's about it for this week at the oasis.  Until next time,