The trail to Delicate Arch is a 3 mile (round trip) in and out hike.  What it lacks in length, it makes up for in aerobic workout.  The hike in climbs a steep slick rock section that gets the heart pumping.  Joe and I have enjoyed seeing Delicate Arch at least once during all our previous visits to Moab.

Being Memorial Day Weekend, we were up and out the door at 7:00 and happy to find NO line at the entrance and a parking spot at the trailhead.  That is not to say that no one else had the same idea...we were among many other hikers moving at their own pace to this iconic and most recognizable arch in Utah. 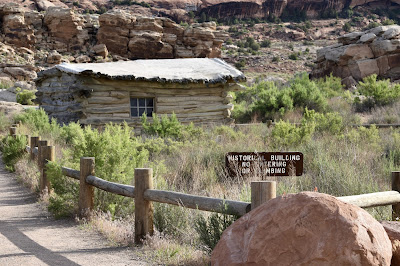 A bit of history along the way describes the John Wesley Wolfe ranch which was built in 1888 and abandoned in 1910. 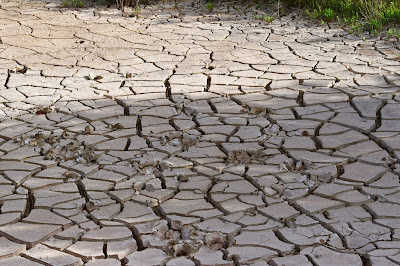 The small creek we crossed had definitely gone over it's bank during heavy spring rains.

Just past the bridge is a short loop to an excellent Ute petroglyph panel.
The horses and riders surrounded by the bighorn sheep with the dog figures were carved as early as 1650. Utah is named for the Ute Indians who moved into the area around 1300. 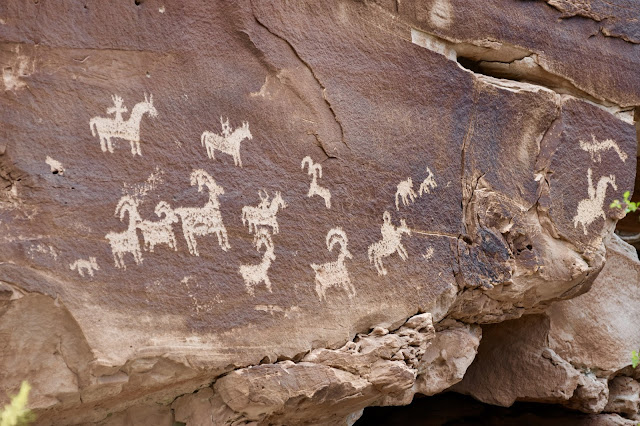 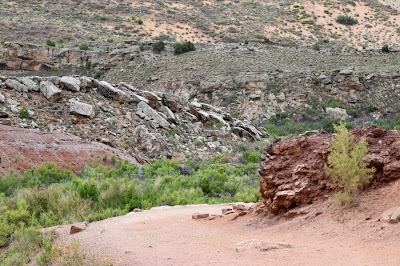 Then the fun begins...the first part of the trail is wide with ups, downs, and arounds that lead to a steep slick rock hill. 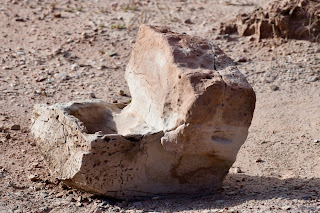 Four years ago, when Joe and I first did this hike we named a rock Potty Rock and every year since, we have seen it. 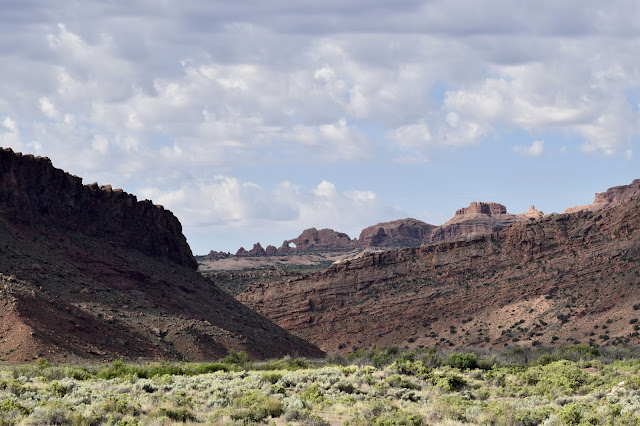 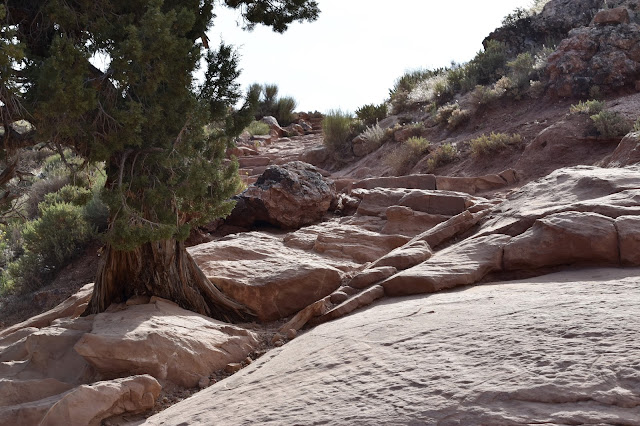 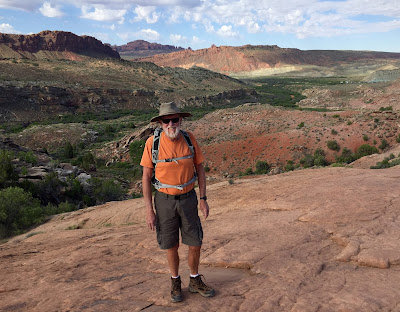 The climb up the slick rock offers pretty vistas to keep me busy with my camera  (umm, that's my excuse for frequent stops and I am sticking to it) ! 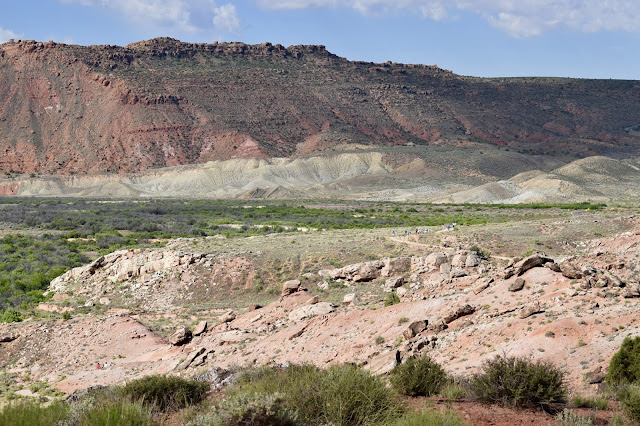 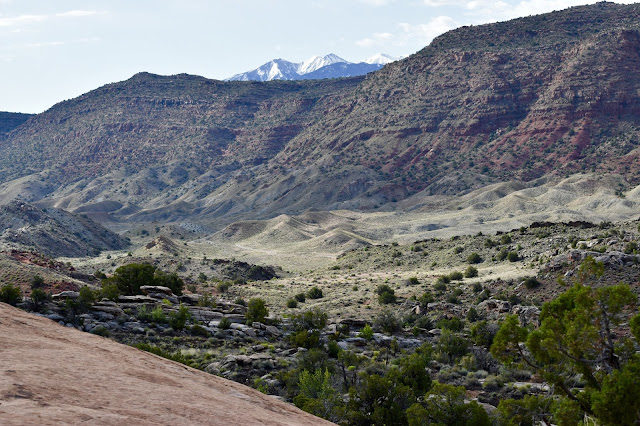 Once at the top, the trail levels out as it winds in between sandstone rocks... 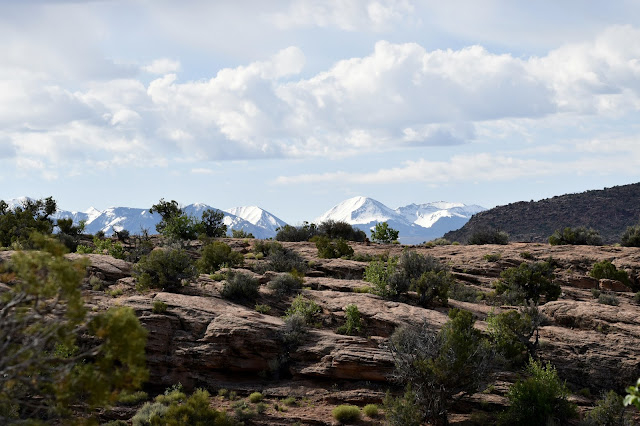 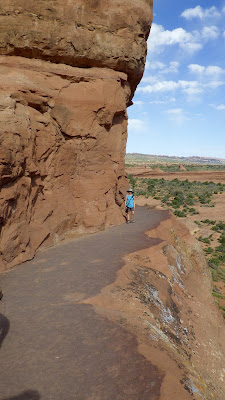 ...until you get to a small ledge that climbs up to Delicate Arch.


On the right there is a small arch called Frame Arch.  It has that name because you can look through it to take a picture of Delicate Arch.  Its a steep, short climb I have never attempted before so thought I would give it a try this year. 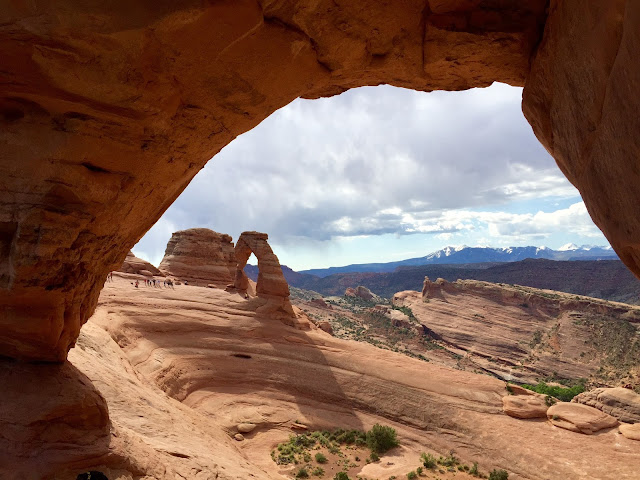 This 65 foot tall natural wonder was once called "the Schoolmarm's Bloomers" by local cowboys.  It was given its current name in by Frank Beckwith, leader of the Arches National Monument Scientific Expedition, who explored the area in the winter of 1933-34. 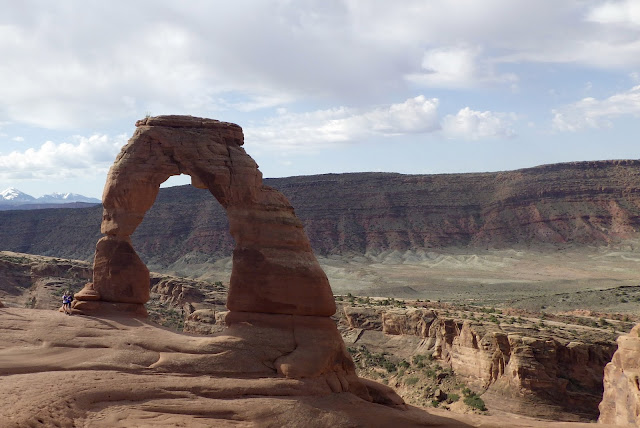 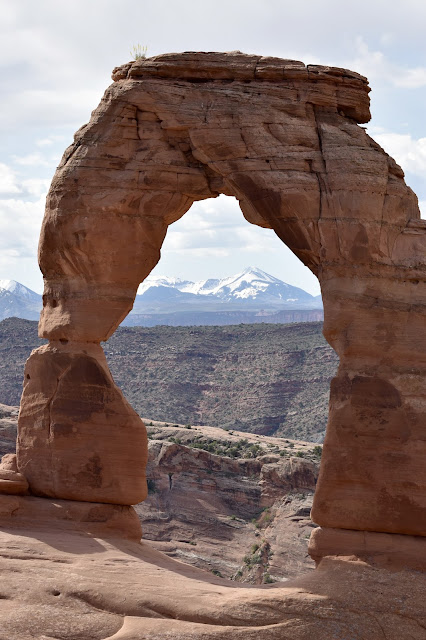 On the hike back down the ledge if you look to the right,  there is another arch (unnamed). 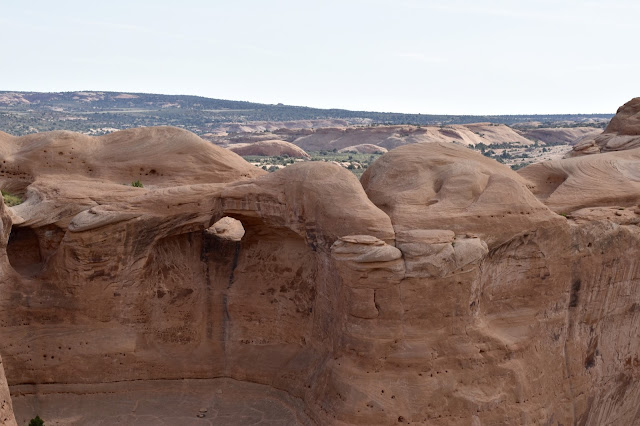 What another great day !  Since the end of May, the temps have soared to the low 100s...not sure how much more hiking we will get in this month.  We have had several great trail rides and seen some awesome petroglyphs...more on that later. 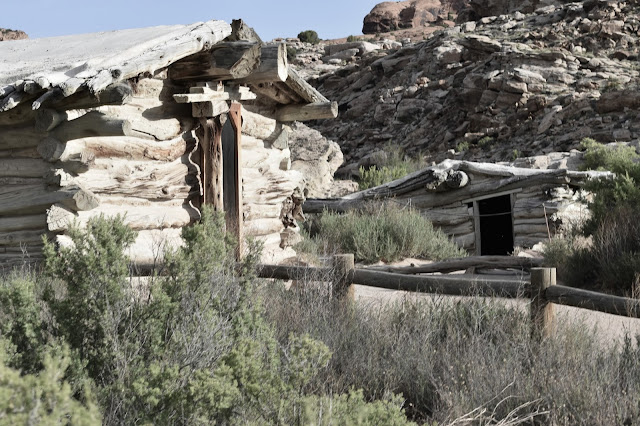 Looking down on the last section of trail back to the parking lot.  Wahoo ! 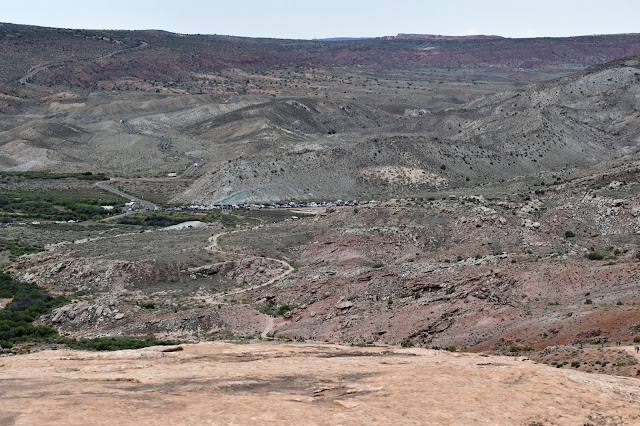 Until next time, happy days and... 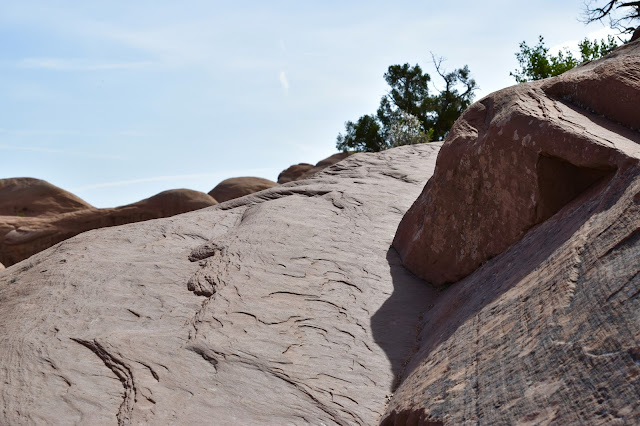 P.S. The three gossips were standing tall and ready for the day as we entered Arches NP. 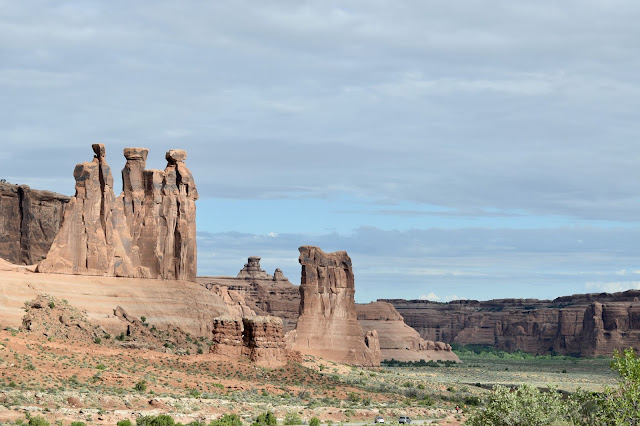 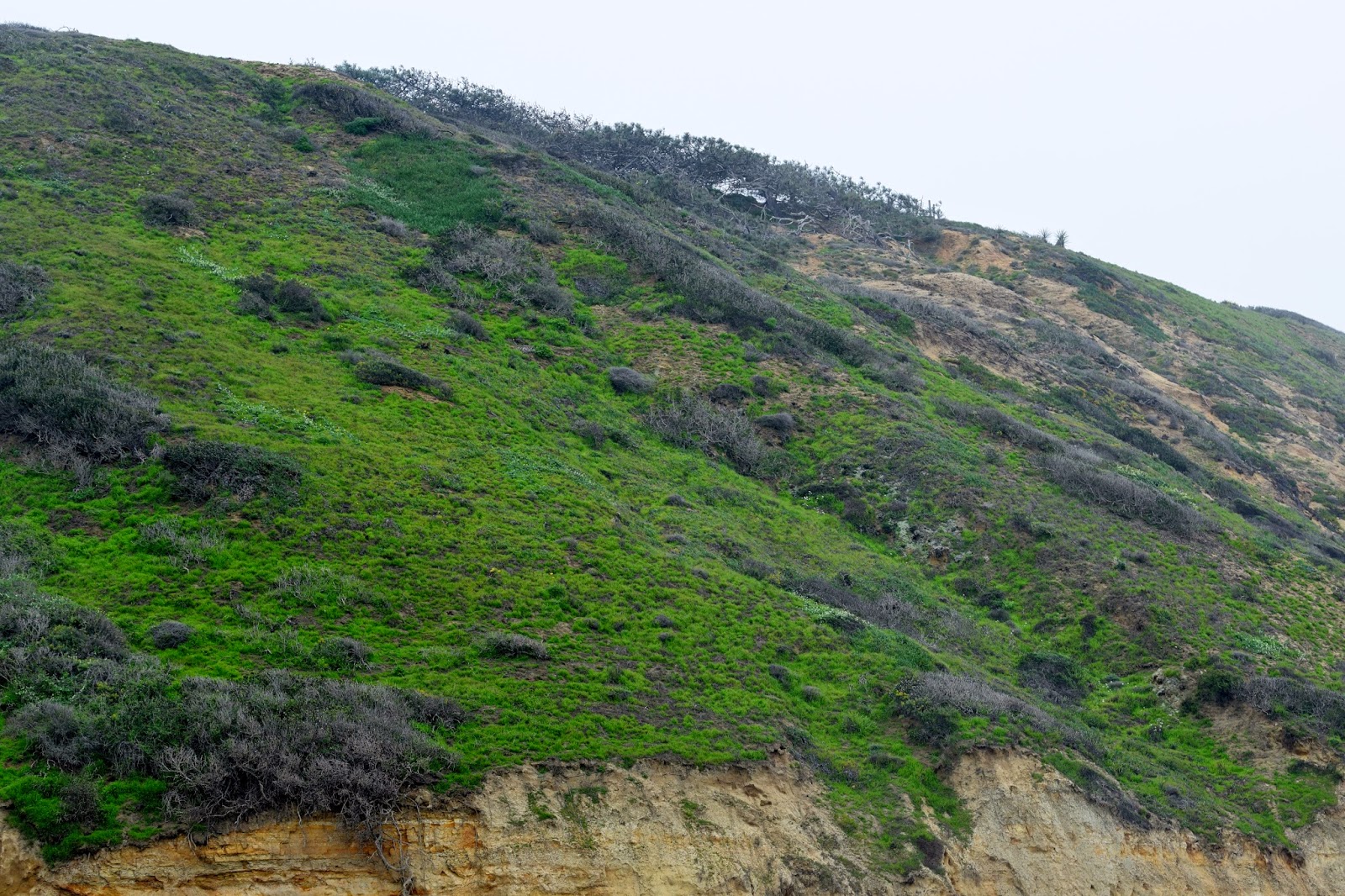