Torrey Pines SNR is located within the city limits of San Diego yet it remains "one of the wildest stretches of land on the Southern California coast". 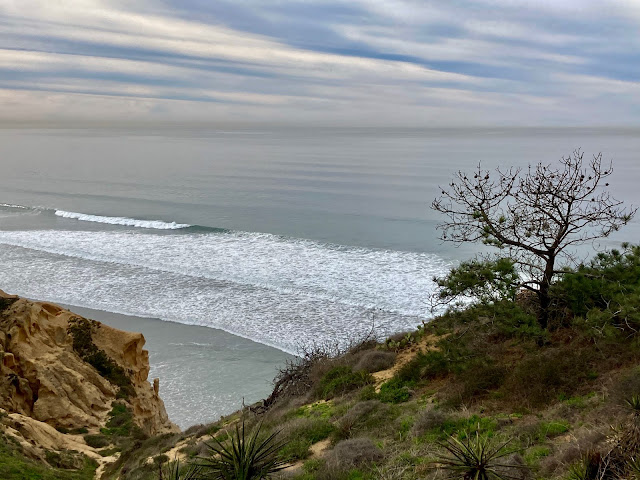 Thanks to the efforts of naturalist Guy Fleming (May 1884-May 1960) and all the dedicated people who followed his lead, we can enjoy these 2,000 acres of land just as they were before San Diego was developed. 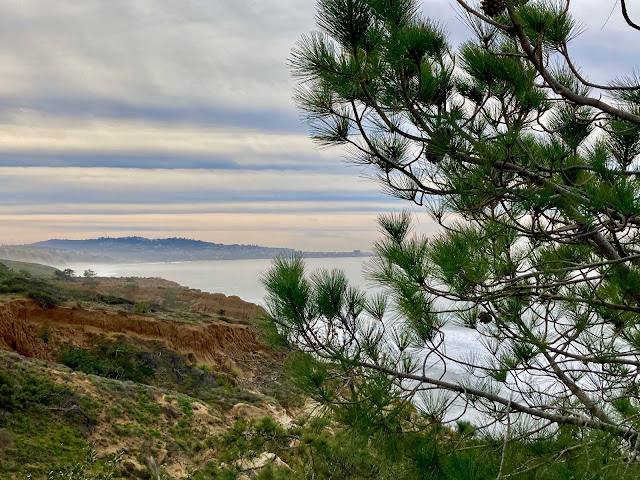 This includes the maritime chaparral , the rare Torrey Pine, miles of unspoiled beaches, a lagoon, and a salt marsh.  When reading about the reserve, it says to keep in mind that a reserve is not a park. A reserve is a protected area targeted for conservation with an emphasis  on protecting threatened plants, animals, habitats or a specific geological feature.  Reserves have restrictions that parks do not have. Examples include no food or drink allowed except water, no pets and no smoking. 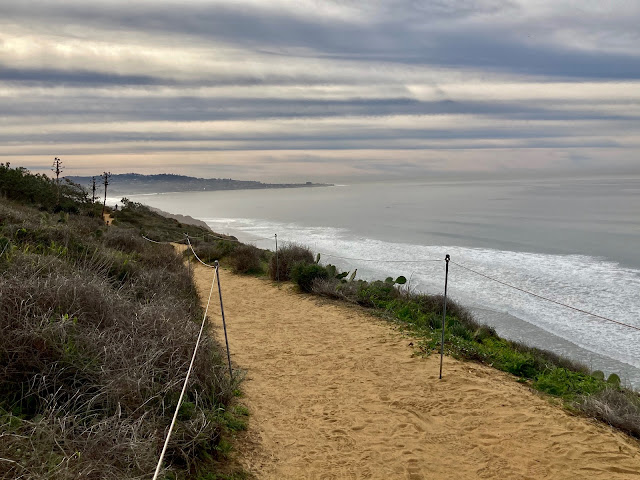 TPSNR includes eight miles of trails offering a variety of distances and a Visitor Center commissioned in 1922.  An entrance fee per car is collected at the gate and hours are from 8:00 am to sunset. 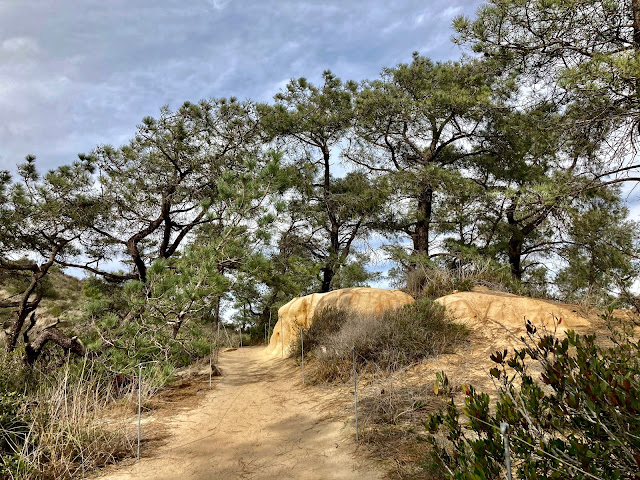 We have hiked in the reserve several times over the years.  It is amazingly beautiful and peaceful and there is something quite magical about meandering among the rarest of all pines in the United States.  The rare Torrey Pines are only found at this reserve and on Santa Rosa Island and are listed as endangered.  It all began in the 1980s with a combination of drought and a bark beetle infestation.  Over 650 Torrey Pines have died as a result.  Efforts began, and are still ongoing, to trap the beetles. Because Torrey Pines is a Reserve, the policy is to let nature take its course. 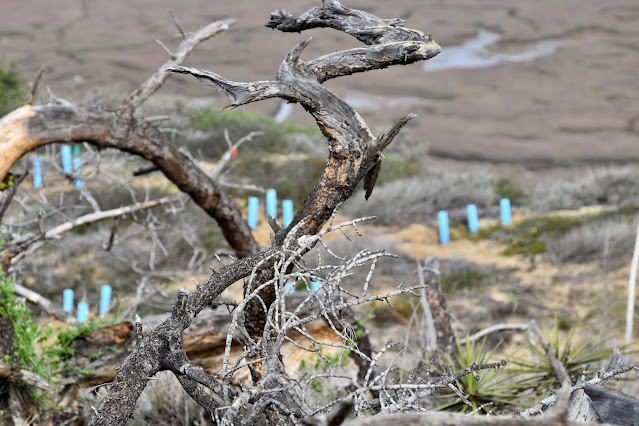 This grove of Torrey Pines on the northwest side of the Guy Flemming Trail is gone.  When we first visited the reserve in February 2015, there was a nice grove here on both sides of the trail .  The blue tubes are seedling Torrey Pines that have been transplanted from other sections of the reserve.

I found it interesting that it takes around 3 years for a pine cone on these magnificent trees to mature and produce seeds. 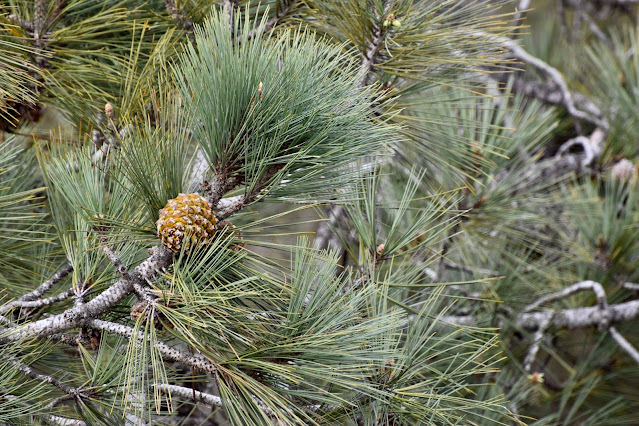 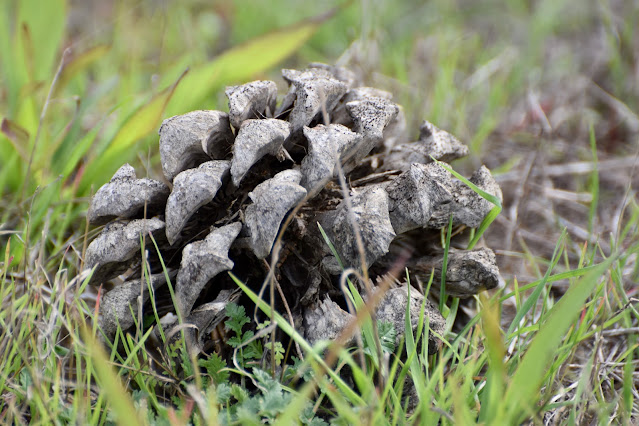 Many older cones remain on the tree, but if you do see one on the ground...it is illegal to remove it from the reserve.

I could go on and on...nature is so amazing and fascinating !

It's not hard to find other things to photograph when walking these trails.  There are flowers...

We all spent awhile at one of the overlooks watching the dolphins play... 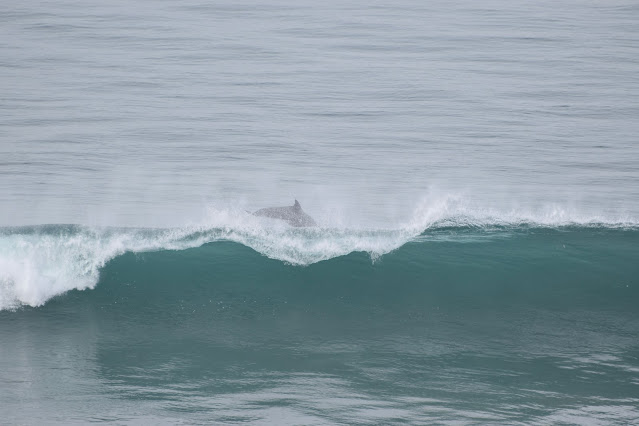 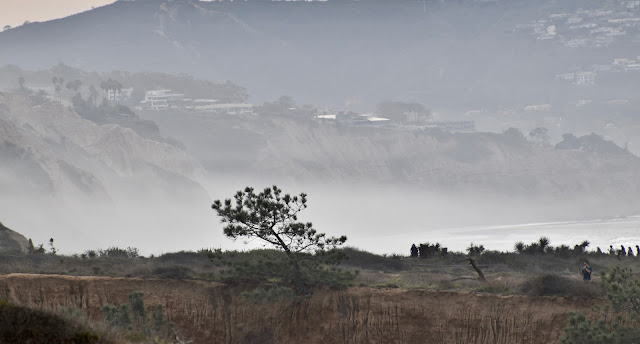 listening to the  pounding waves... 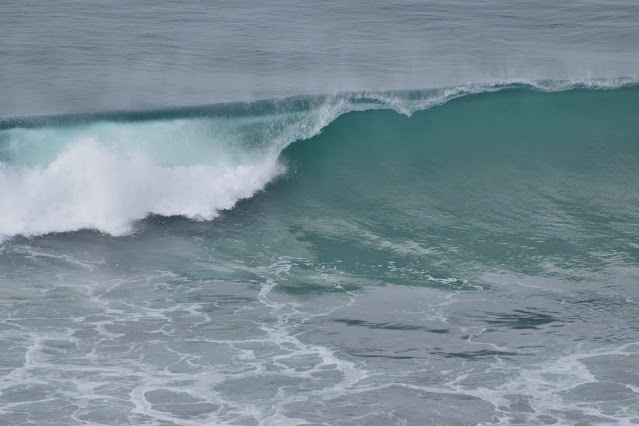 and hoping to see a pair of Peregrine Falcons that the docent said were nesting in the cliff wall. 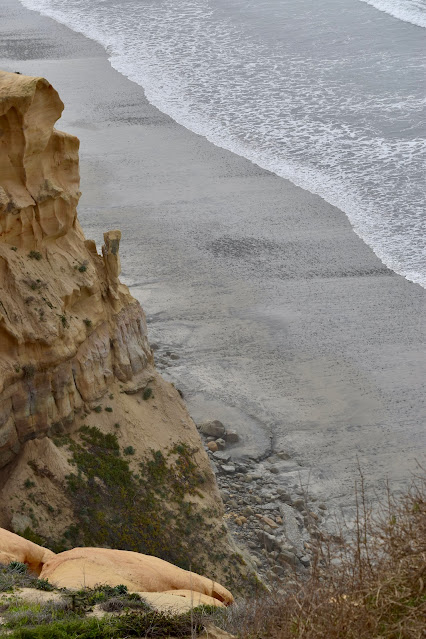 I'll close by adding that if you are in San Diego, we think Torrey Pines is a must see.  And as with most posts, a few more photos ! 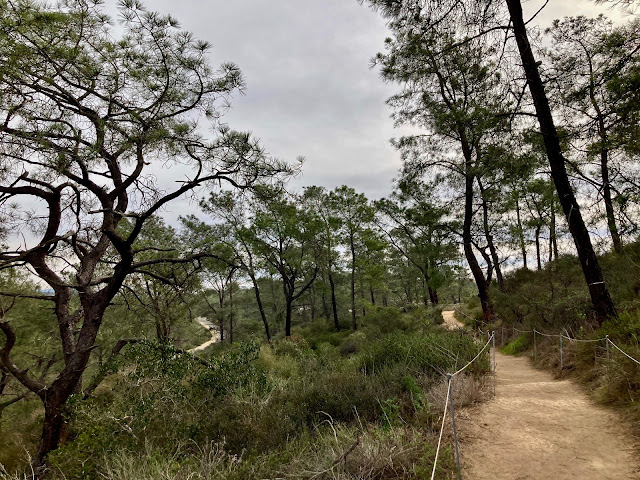