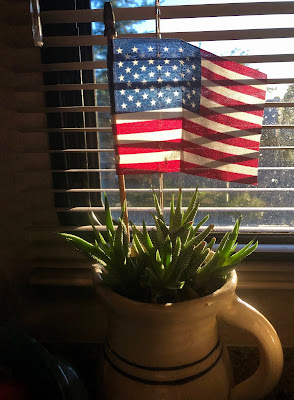 July 4th dawned bright and early...6:08 am to be exact...with sun rays filtering through the window. 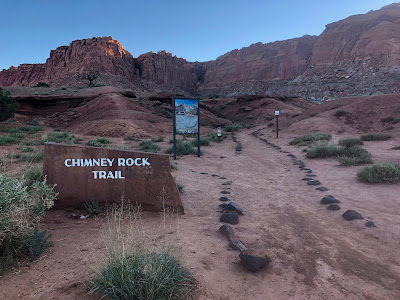 Plans for the morning were to hike the Chimney Rock Trail.   It is a 3.7 mile loop that the NP rates strenuous.  The park suggests doing this hike at sunset to get the best lighting.

Knowing this going in, I expected the sun to rise enough to hopefully get at least a few good pictures by mid-morning.

We very quickly figured out why this trail is rated strenuous...it's all up hill !  After starting the trail on hard red ground, a short, but quite steep ascent of nearly 300 feet reaches an intersection. 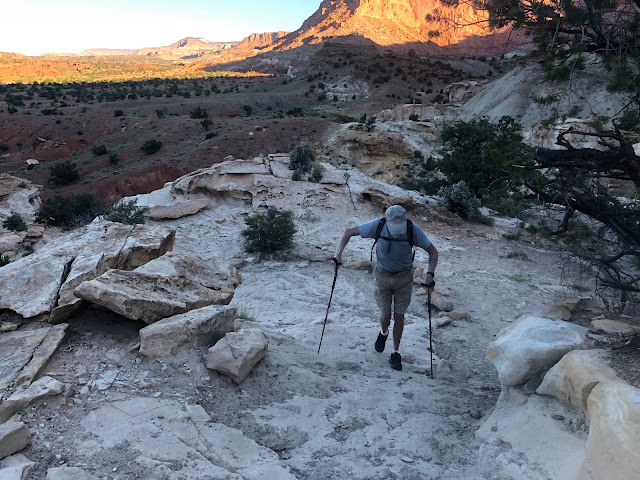 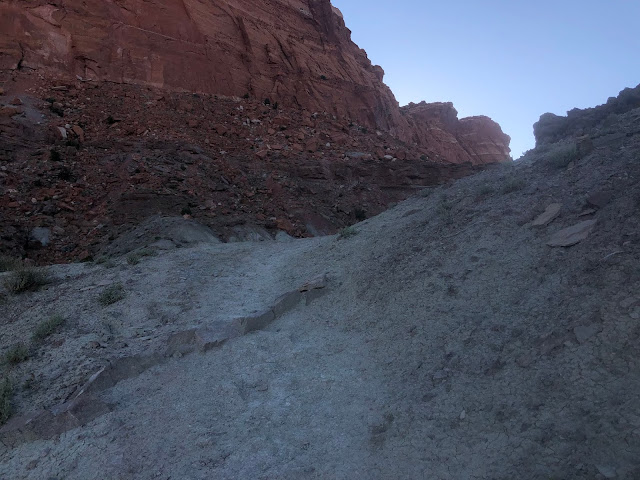 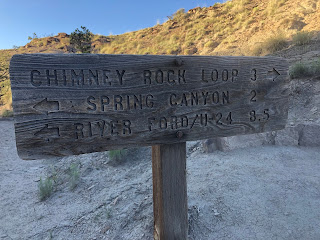 At the intersection, turn right  to begin the loop.  The climb once again is quite steep.


Thinking about what is over the hill... 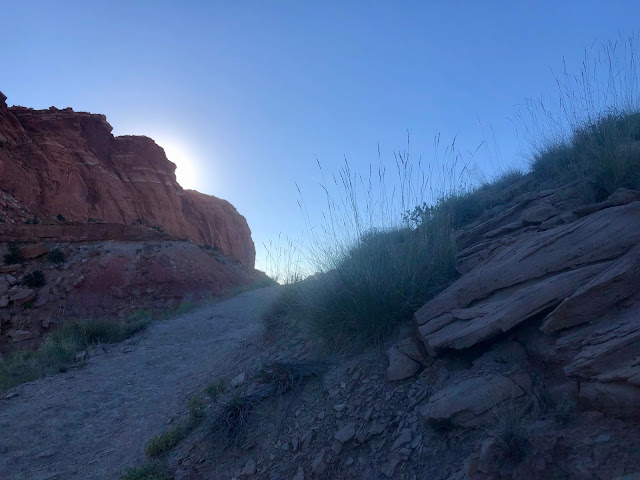 or around the next turn is a nice distraction from the steady uphill climb. 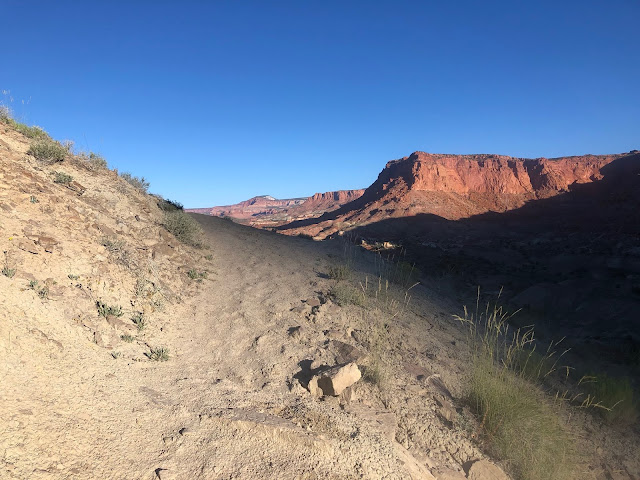 Chimney Rock Formation is the westernmost tip of Mummy Cliff.  It is easily visible from Hwy 24, but Joe and I thought we would see a lot more of Chimney Rock from this vantage point.


From here, the trail heads east along Mummy Cliff and up to a flat summit at 6,634 ft.


The trail starts to descend after the summit. 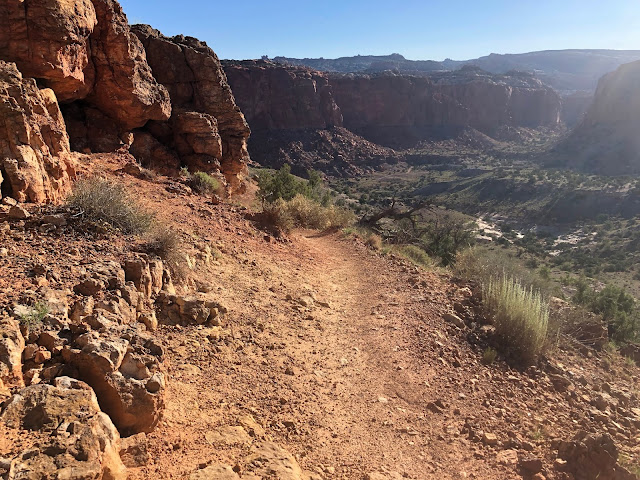 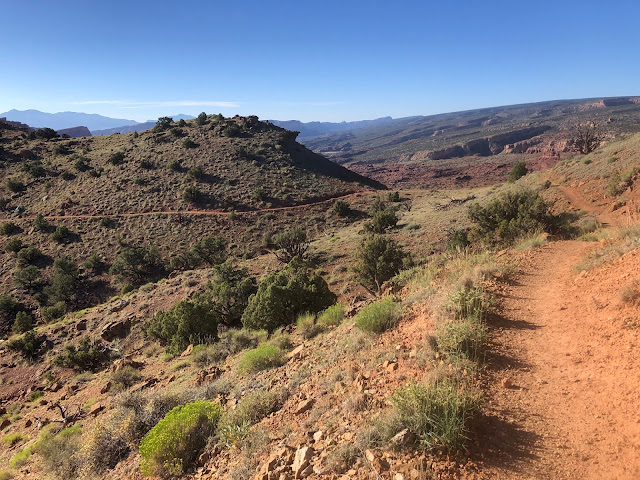 We passed an outcropping of eroded rocks that looked like dinosaur toes. 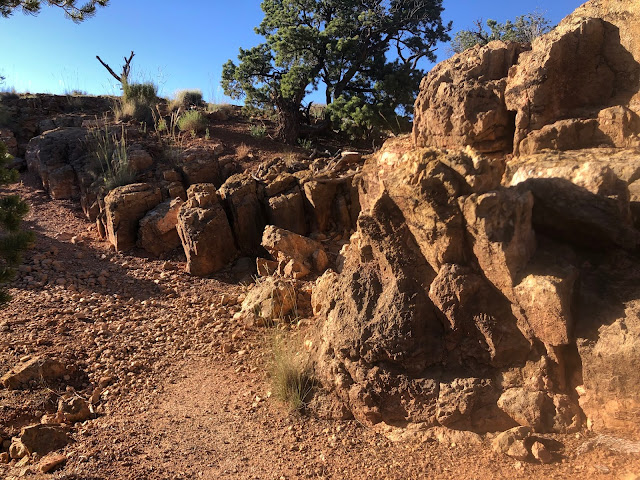 It wasn't too much farther when we reached another intersection...signs point you in the right direction.  As you head west the landscape fills with reds, purples, and browns. 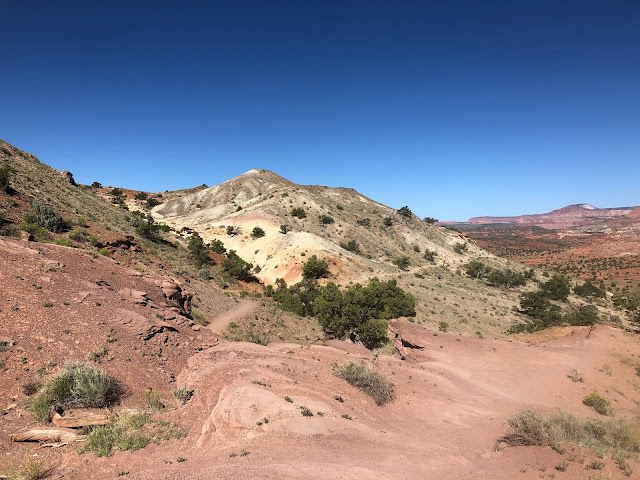 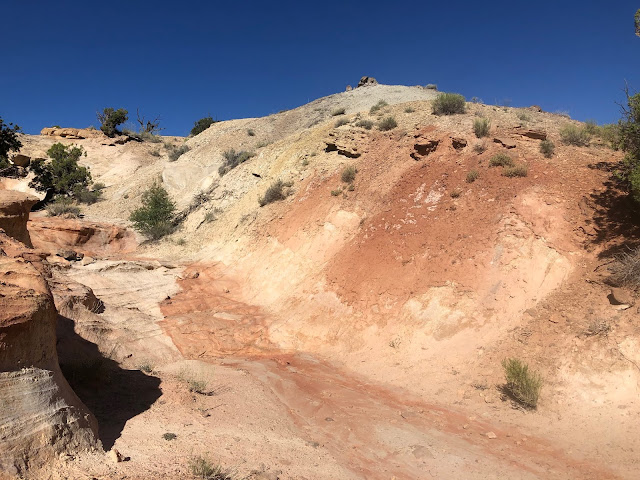 It wasn't much farther and we were back at the first intersection.  What a view of Chimney Rock Canyon. 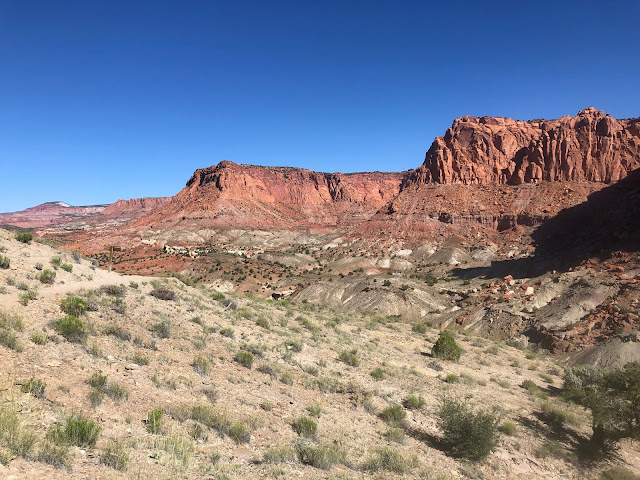 The steep decline down was not so difficult.  The surface was hard and there were no little rocks that seem like marbles under your feet. 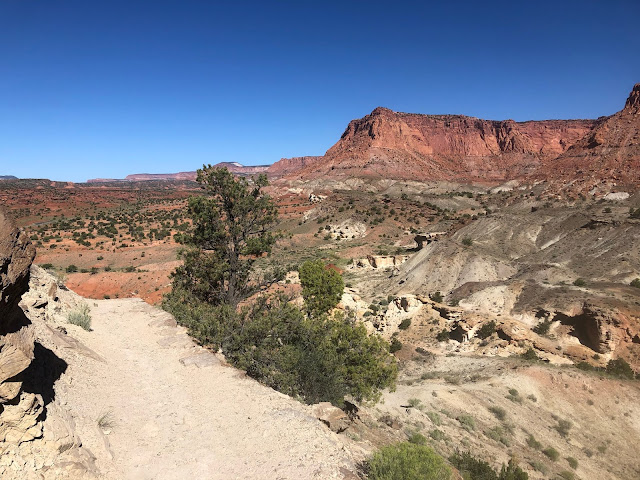 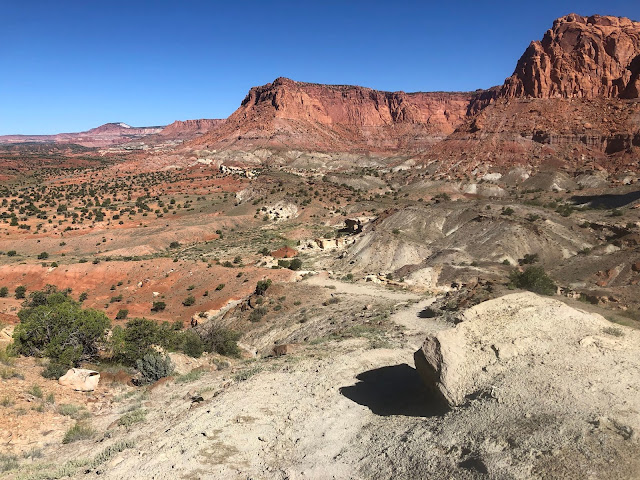 Would the lighting for photos have been better at sunset? Yes.  Would we have enjoyed the hike any more if we had done it at sunset?  No. 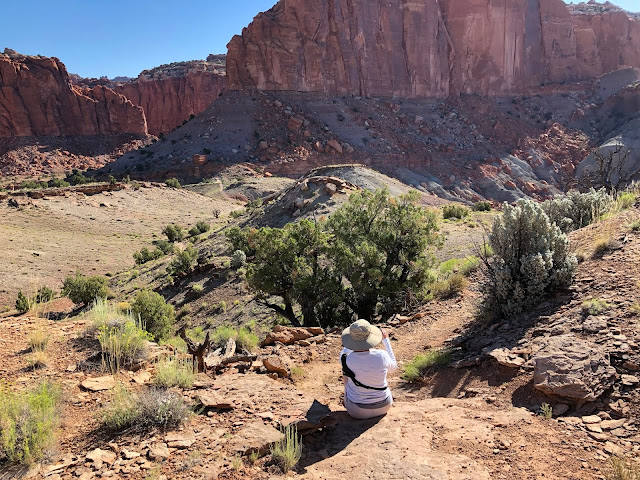 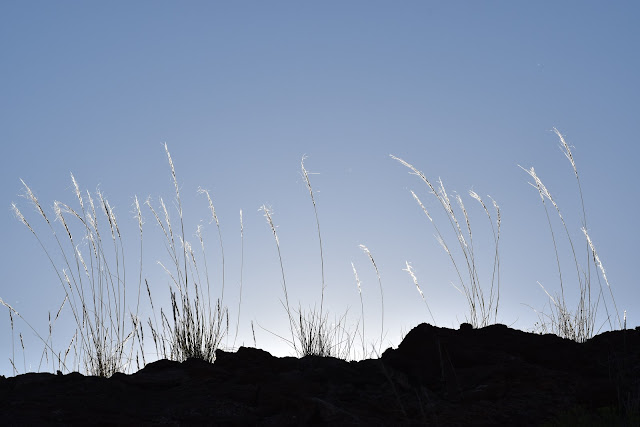 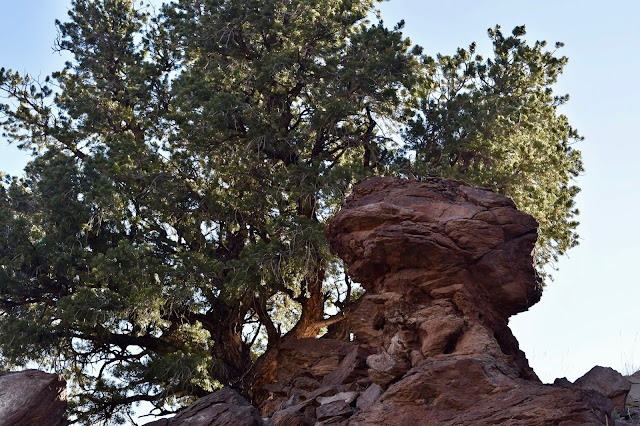 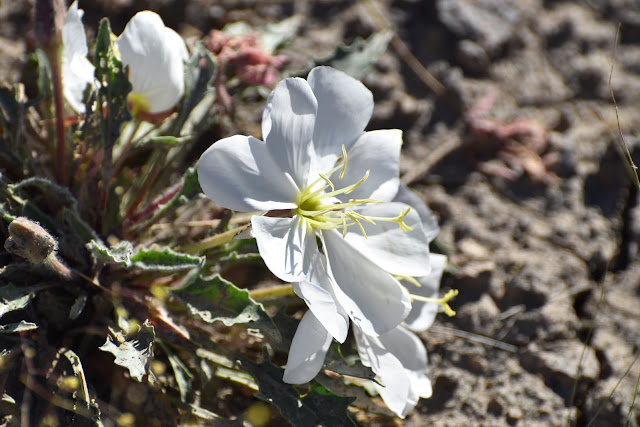 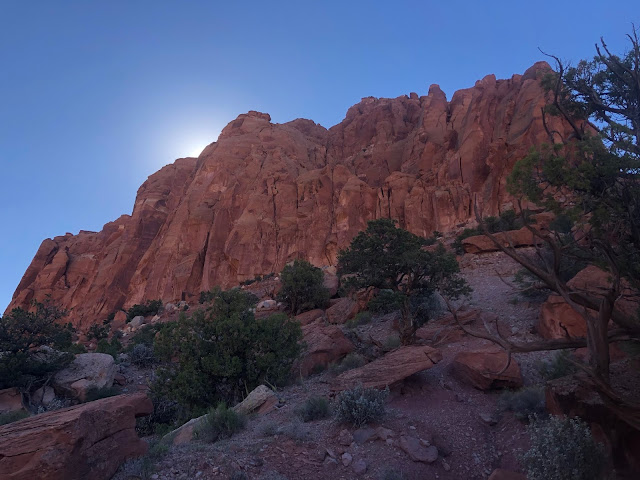 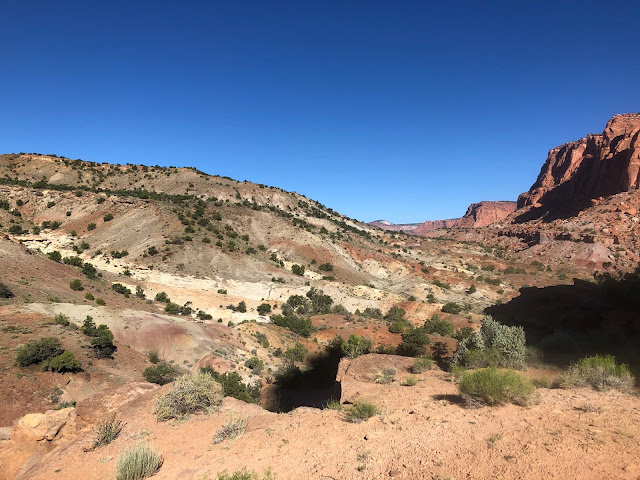 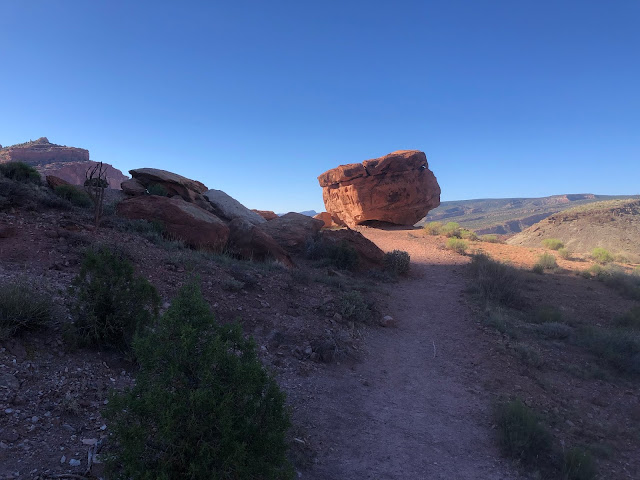 Oh, I almost forgot.  This is a picture of Chimney Rock taken another day from Hwy 24.  Chimney Rock was once part of Mummy Cliff.  But as the cliff eroded back further, Chimney Rock has withstood the tests of time. Made of harder rock or positioned just right to shrug off the winds and stone-splitting frosts, the natural landmark is more resistant to erosion than the surrounding sandstone. 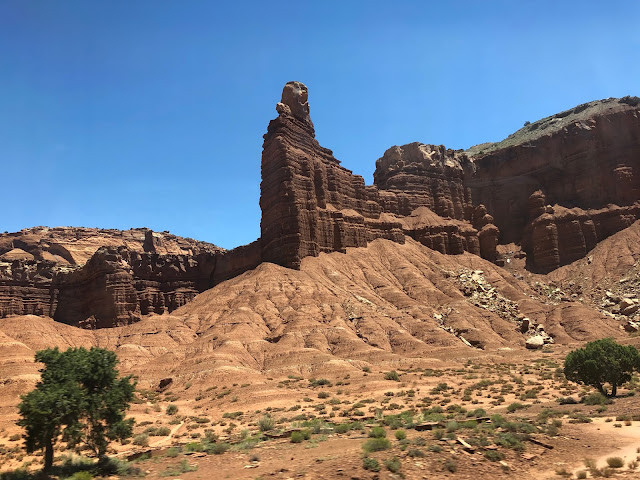