On Monday Joe and I went to  Alibates Flint Quarry. 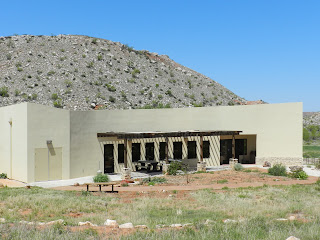 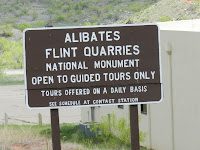 Alibates Flint Quarry is the only National Monument in the state of Texas. It is about 30 miles north of Amarillo in Fritch, TX. Alibates flint is the only flint that has color and is only found in this area. It is found along the sloping canyon rims of the Canadian River Valley. Small pits and tons of stone manufacturing debris are testimony to prephaps 13,000 years of quarrying the brilliantly colored stone. Prehistoric hunters traveled-or traded-over distances of 1,000 miles to obtain this stone. Points and other tools made of Alibates stone have been found as far north as Montana, as far south as Central Mexico, and east to at least the Mississippi River. Finely flaked and fluted Alibates flint have been found at the scene of a mammoth kill in New Mexico. The site dates to 13,000 years ago at its earliest. There is more evidence to suggest that later visitors to the quarry mined the stone more intensively. They used the flint to outfit all parts of their "toolkit" as well as for trade for other materials. In 1877, Allen (Allie) Bates bought the land and it became the LX Ranch. To this day, no one knows what happened to this mysterious LX Ranch cowboy , Allie Bates, whose name has become famous in this part of the Texas Panhandle. 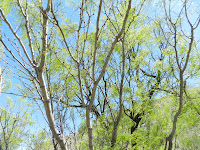 The mesquite tree has been growing since the Ice Age which lasted from about 1.8 million to 10,000 years ago. At that time they were wide spread because its natural partner was the mammoth. What makes it so interesting is that the pod has a parasite that kills the seed, but when consumed by mammals, the parasite is killed in their digestive systtem, and the seeds were widely dispersed in their "poop". So mesquite trees grew wherever mammoths roamed. In the 1500's, when the Spanish brought cattle to this area, the mesquite had a new natural partner. Today these trees are widespread throughout the Southwestern U.S. from southern Kansas and west to the Colorado Desert in California. Native Americans relied on the seed pod as a dietary staple from which they made tea, syrup, and ground meal. The bark was used for basketry, fabrics, and medicine. And the taproots (which are often bigger than the trunk) were dug up for firewood because it burns slowly and is smokeless.


There is a Mesquite trail at the ranger station. It is a self-guided hike about 3/4 of a mile long.


FYI...The Canadian River was damed up in New Mexico about 10 years ago and no longer flows through Texas...About 1000 quarries and  have been uncovered in this area.....All but 1/3 of Lake Meridith has dried up...The Rangers at this National Park are awesome. Thank you GIGI for your time and info!﻿﻿