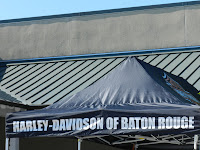 Yesterday Joe and I went for a Harley ride around Baton Rouge. We did stop at the H-D Dealership here. We both got t-shirts! We routed our ride to avoid major highways. Traveling through Baton Rouge is not easy....lots and lots of heavy traffic and to top that off...lots and lots of construction on the roads and bridges. Not much fun on the bike unless you go outside of the city. The pups enjoyed a very long play day at the park when we got home! 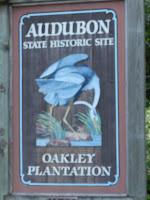 Today we took a trip on scenic highway 61 towards Natchez. Our first stop this morning was at the Audubon State Historic Site. We ended up spending about 21/2 hours there. That included a 45 minute guided tour through the Oakley Plantation. We learned that John J. Audubon spent 31/2  months at the Oakley teaching/tutoring the 16 yr. old daughter of the owner. During his time there he painted 32 of his Birds of America.We learned that he had to kill the birds in order to paint them and that all the birds were painted to scale. He had a 13 year old apprentice to paint in the proper vegetation to add to each bird painting. 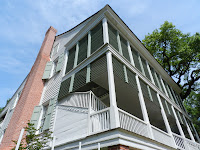 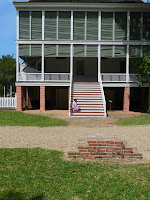 The Oakley Plantation was built in 1806 by the Pirrie family. It was a very large and wealthy cotton plantation and at the height of its wealth had approximately 3200 acres of land. It is the only home in the area to boast 3 stories and louvered galleries for air circulation. Bedrooms were located on the top floor. One of the beds actually folded so it could be moved to the porch for sleeping on hot summer nights. The louvers kept the sunlight and rain out, but allowed  cool breezes in. Typical for the period, the large kitchen and fireplace for cooking were detached from the house. The Oakley was passed down to 3 generations of Pirrie's women with the last of them leaving in 1957.  When she could no longer live there alone, she sold the plantation for $10,000 to the state of Louisiana. 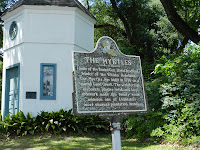 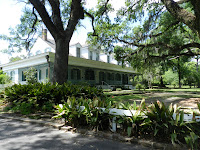 The Myrtles Plantation is a few miles away. It was built in 1796. It had many different owners  throughout the 1800s and 1900s. Today it is a bed and breakfast and has facilities for weddings and receptions. It has been featured in many magazines and on many television shows including Unsolved Mysteries. It is touted as "one of America's most haunted homes'. It is supposedly the home of at least 12 ghosts and its reported that 10 murders occured in the house. 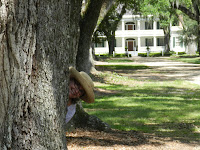 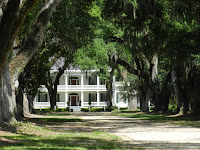 Last, but not least is the Rosedown Plantation. It was built in 1835 by the Turnbull's. It took 6 months to build and $13,109. It was built with local cypress and cedar.  The last survivior of the Turnbull family, lived there until she died in 1955. In the garden is a Loblolly Pine that is over 300 years old. A doctors office was built on the plantation in 1844. The Oak Allee (live oaks) were planted about 10 years before the house. Most plantations had some type of allee leading up to the house to have a grand entrance, but allees also helped funnel the breezes towards the house. Cotton grew on at least 3000 of the 3500 acres that made of  Rosedown. 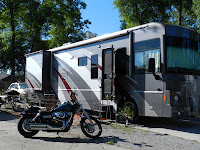 Well, tomorrow will be laundry, cleaning and packing up day. Our "plantation" is moving on Wednesday. We have an over-nighter in Shreveport, LA ,then it is on to Grapevine, TX on Thursday for a week. More later......
Posted by Gay and Joe at 9:32 PM